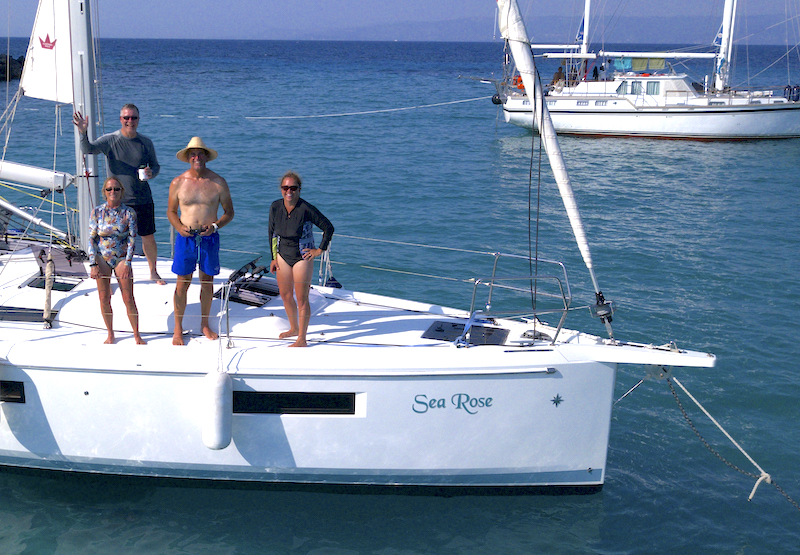 After a long day of transatlantic travel, it felt great to be back onboard Sea Rose. During our trip back home to the States, she had managed just fine in her slip at the Gouvia Marina on Corfu. When your boat is your home and you put your blood, sweat, and tears into her care and feeding, it’s a little unnerving to leave her alone for ten days. In our favor, no sudden storms arose nor bumps from navigationally-challenged neighbors. She was just as we left her, plus a little growth on her waterline from the few days of idleness. It was time to get our pride and joy prepped and ready for more adventure. Our friends Steve and Julie would be arriving in two days and we had a full task list to complete before we started entertaining again.

END_OF_DOCUMENT_TOKEN_TO_BE_REPLACED 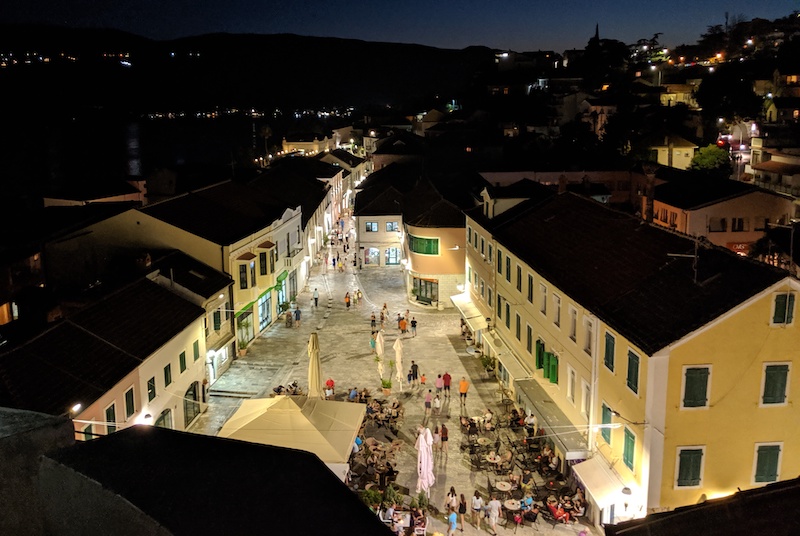 The day and the hour had arrived. It was time to exit Croatia once and for all. Six weeks ago, we had cleared into a country that we knew only through travel books and friend’s stories. This morning, we would trek back to the harbourmaster’s office to clear out, with a plethora of diverse experiences tucked away in heads, enough to fill a few storytelling sessions around a winter’s fireplace.

Our kids and Andrew were on their way to the airport, and we wasted no time shoving off from the Q dock to make progress south along the isolated last few miles of the Croatian coast before entering Montenegrin waters. This time around, we weren’t groggy from an overnight passage from Italy. We had slept well, and knew exactly where to go and how to clear in to Montenegro.

END_OF_DOCUMENT_TOKEN_TO_BE_REPLACED 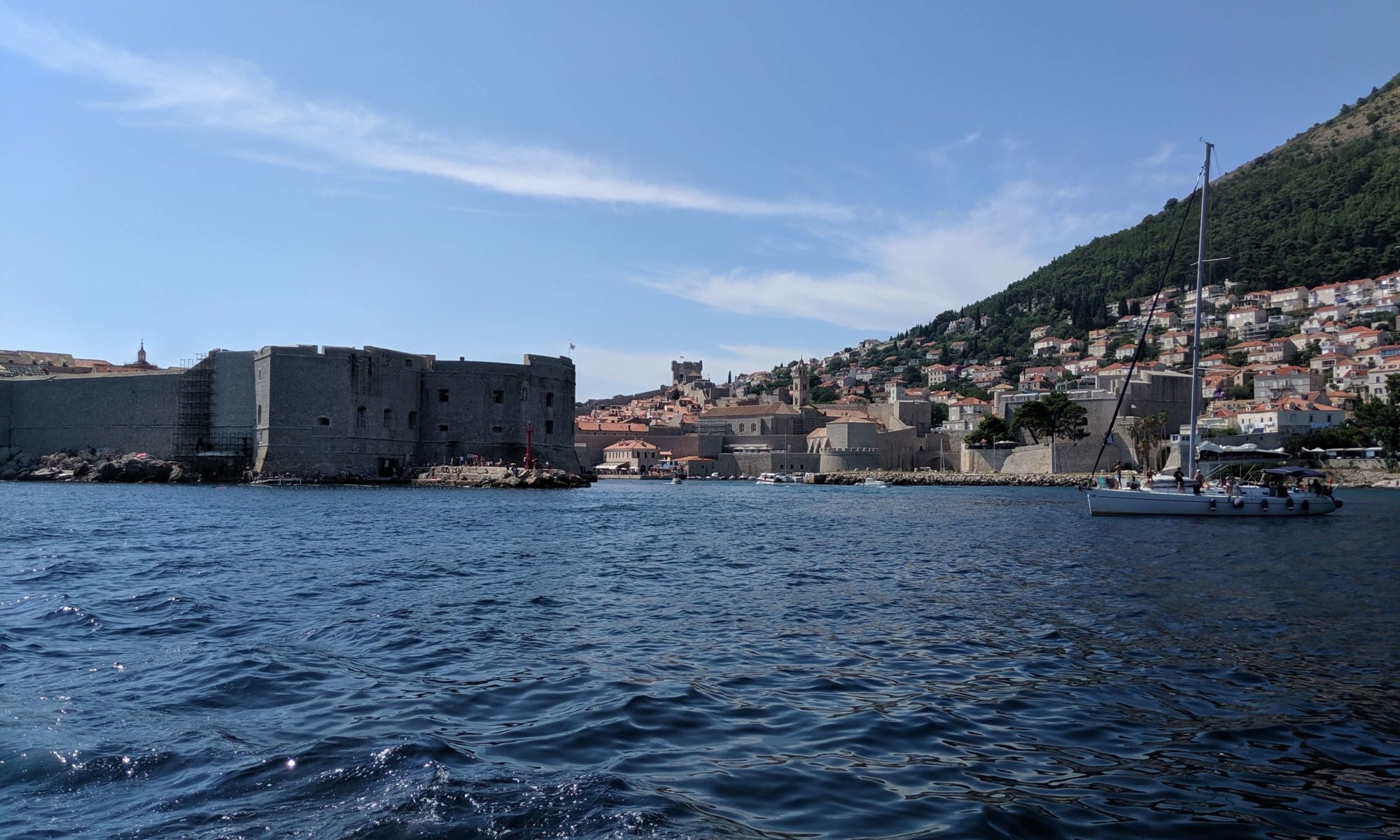 It was mid-July and we were headed back up the Rijecka River just north of Dubrovnik for another quick turn-around for fuel, water, laundry, cleaning and provisioning (all easily done at the ACI Dubrovnik Marina). We were very much looking forward to welcoming our two young-adult kids and one of their friends on board for a week of continued exploration of the amazing Croatian islands. Our fingers were crossed, hoping we had reached the end of the long streak of bad weather we had been coping with. You will recall our last couple blog posts about the many, low-sleep nights we experienced at the hands of Mother Nature where we had a night-time fight with an unfurling code zero followed by several nights of dragging anchors (ours, but more often others) and repositioning boats mid-storm. Our nerves were frayed, our patience was tested and strained and our ability to cope was compromised by not enough sleep. This is not the best way to begin a week with family, but we hoped a night on anchor in a very familiar and secure place would help.

END_OF_DOCUMENT_TOKEN_TO_BE_REPLACED 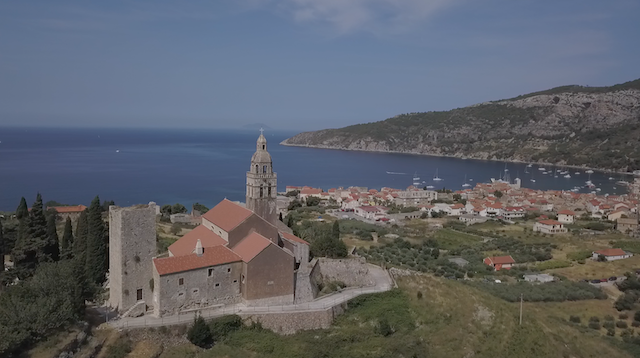 For the next week, we planned to slow down and take a break from hosting mode, as we made our way by ourselves south to Cavtat to pickup our kids. In the last few weeks in Croatia, we had been forced to skip several interesting islands due to the weather or schedule challenges. We now finally had a chance to check these places out before we said goodbye completely to this country of countless islands.

Bidding adieu to Emmy, Graham and Sarah, we set off from Murter with the eagerness of seeing new places, while re-visiting some of our favorites. As we entered our fifth week in Croatia, we were starting to gain the comfort and confidence that comes with prior knowledge of these waters. No longer were we shuffling through pages in a cruising guide on a cold wintry night; we had zig-zagged our way through these long, skinny islands on our own craft, faced a fair balance of adventure and adversity, and were still married happily enough to want to spend another week alone together!

END_OF_DOCUMENT_TOKEN_TO_BE_REPLACED

Moving to the East Coast of the U.S. many years ago, we had to accept the difficulty of staying in touch with our West Coast family roots. Not only did both of our brothers live in California, but much of my extended family was in British Columbia. And despite best intentions, it simply is hard to keep close ties. So I was pleasantly surprised, after reconnecting during a winter ski trip to Western Canada, that my second cousin Graham and his wife Sarah accepted our open invitation to join us for sailing in the Med. Perhaps because of our casual nature, I think they thought they better take us up on our offer before we changed our mind! Both Graham and Sarah sail their own boat on Okanagan Lake, and we always welcome experienced hands onboard Sea Rose. After planning our summer cruising calendar, we reached out to our friend Emmy to see if she could join us for the same week. Emmy took up the challenge last summer, helping us sail overnight from the French Riviera to the rugged island of Corsica, and we knew her friendly demeanor would fit in well with my Canadian family.

END_OF_DOCUMENT_TOKEN_TO_BE_REPLACED 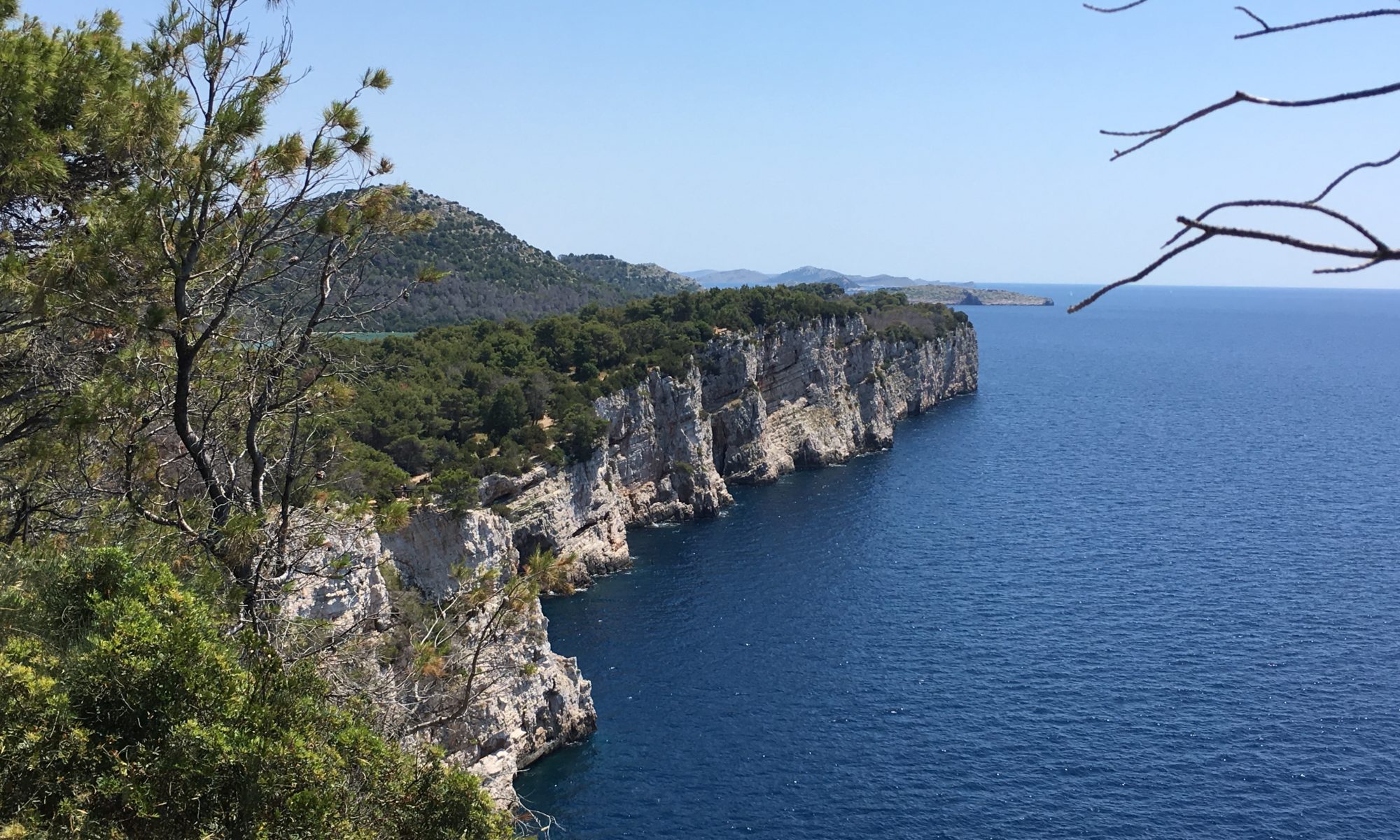 It was mid-June and by this time, we had been in Croatia for a little over two weeks and had spent a lot of time in the southern islands of this lovely country; however, as our next set of friends joined us, we were excited to be moving further northwest into an area abundant with national and nature parks! Tom wrote about our visit to Mljet National Park which occupies significant land and coastline on the island of the same name. Before we would leave Croatia, we will have visited Mljet two more times! This post will introduce two additional national parks and one equally special nature park. We’re lucky to be able to capture this beauty digitally today. I would hate to have had to ration my film use in these amazing places in the days of my youth. Prepare for a high number of photos!

END_OF_DOCUMENT_TOKEN_TO_BE_REPLACED 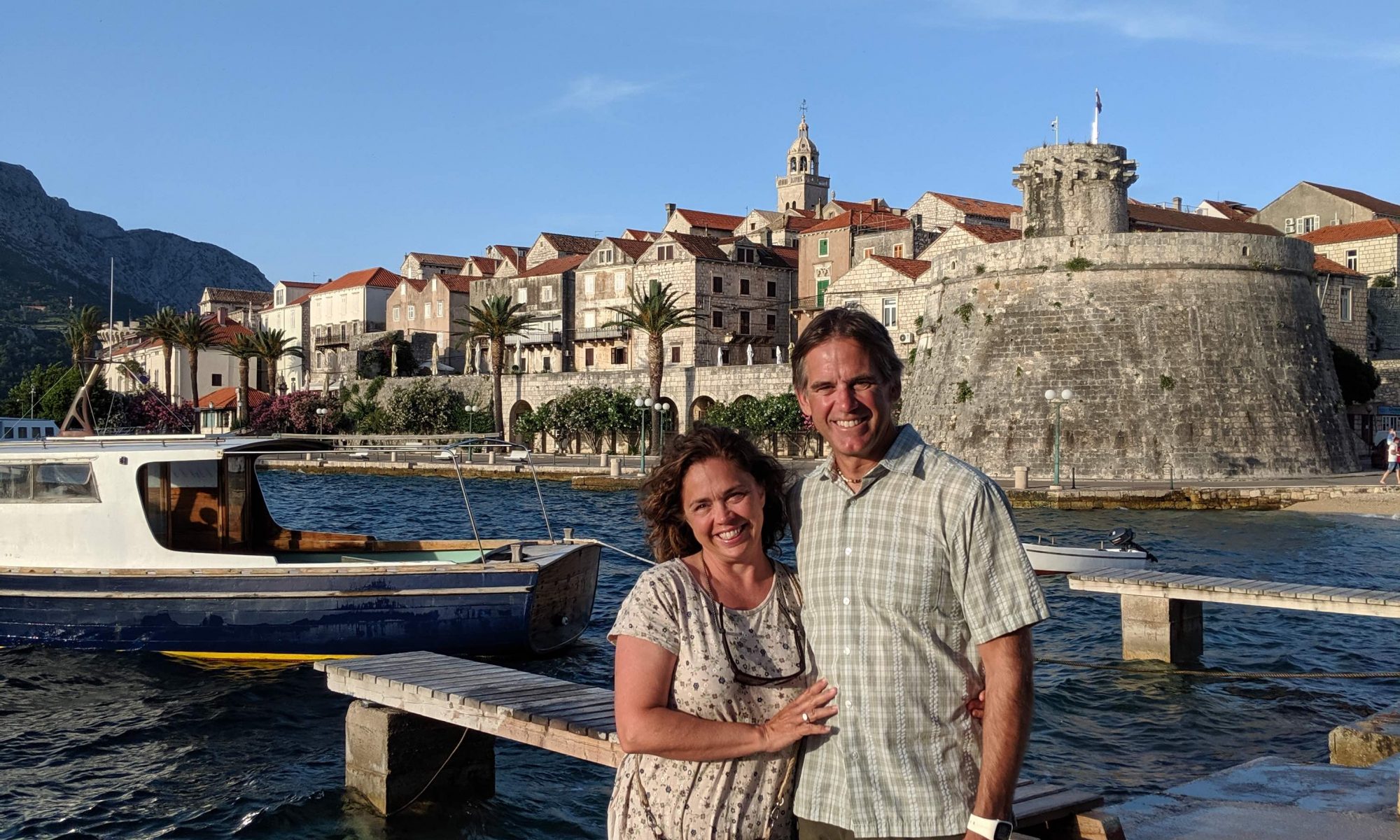 We have a bunch of visitors lined up to come stay onboard Sea Rose this summer – 30 in all between mid-May and early October. We are often asked if this is too much and because of these questions, we ask that of ourselves … are we ‘ok’ with the work required to host this many groups and individual people? For us, it comes down to two important factors: (1) the obvious – we love seeing our friends and family and when we travel five months out of the year this is one way to remain connected to people who are important to us; (2) when we have friends and family on board, we live our experiences more fully than we do when it is just Tom and I. Having others around causes us to use fresh, naïve eyes as we pass through the days with our company on board. It is almost like having kids; if you’ve had them you’ll understand what I mean. Parents often free themselves up to re-experience things their kids are learning with abandonment; even getting as silly as their young, exceedingly loved companions! When having people on board for whom our lifestyle is not a regular occurrence, we allow ourselves to become fully immersed in the experiences of our guests, or our ‘kids’ if you will!

END_OF_DOCUMENT_TOKEN_TO_BE_REPLACED 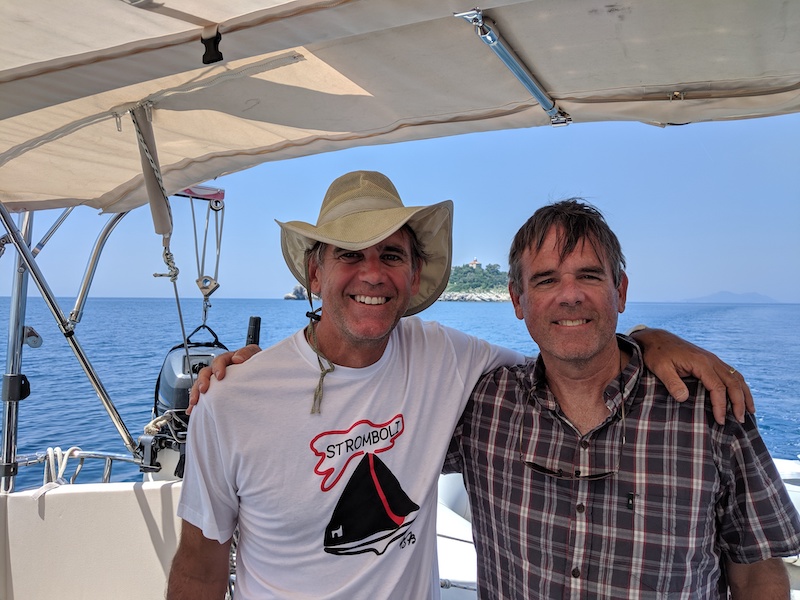 I hope my parents can look down from the heavens this week with pride. Like all parents, they just wanted their children to be happy, but more than that, for them to get along. Maybe not as best friends, but at least cherish their company and care for each other’s well being. But this isn’t always easy in practice. Todd had the marching orders, whether desired or not, to break the trail, and through sheer luck of birth order I was allowed the time to observe his experiences, learn and adjust. In sailor speak, he was the first into an unknown harbor at night. I got to breeze into the same harbor with all the knowledge and confidence of a seasoned captain. Our divergent roles, and a 4 year age gap, didn’t help. But time is the greatest healer. And learning how to be adequate parents ourselves brought us further together. It was in this spirit that we found a week in our busy schedules to sail together in Croatia. Todd was joined by his wife Molly, and sons Richard and Peter. Unfortunately, their daughter Julia was halfway around the globe in New Zealand pursuing her own geographic adventures and couldn’t make this trip.

END_OF_DOCUMENT_TOKEN_TO_BE_REPLACED

If you had asked me a year ago where Croatia was, I’d have a hard time locating it on a map. Now, we were about to become intimately familiar with this mysterious country and its coastline. But first, we needed to be welcomed into the country by Mr. Customs and Mrs. Immigration. From fellow boaters and books we had read, I was prepared for a little more bureaucracy and a few more bucks to have the pleasure of sailing these waters. We were told that Croatia was more expensive than other Mediterranean countries. And back in Montenegro, one official warned us to be very careful to check in at the first available port. He told me the tale of two boats that had taken liberties with entering Croatian waters unofficially, one to seek safety during a storm, only to end up being fined over a thousand euros. That got my attention. As did the sleek sailboat docked behind him that had been confiscated by Montenegrin authorities for reasons that might get me killed if I asked. OK, maybe not that severe, but it is fair to say that the message had been delivered and we would be stopping at the town of Cavtat, just across the Croatian border, pronto.

END_OF_DOCUMENT_TOKEN_TO_BE_REPLACED 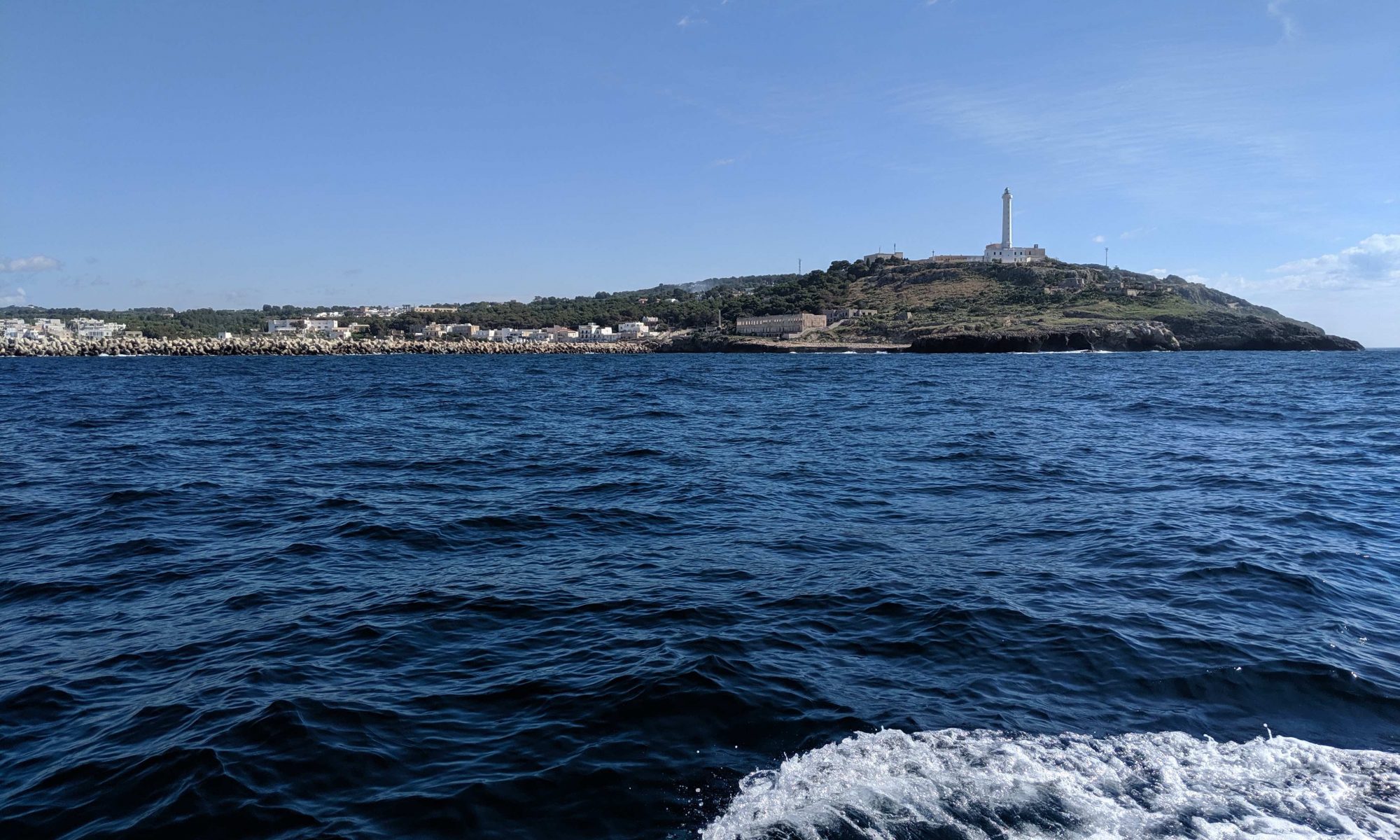 With two adult children, our days of ‘time-outs’ are behind us … or so we thought! Right now, we most definitely need a time out … of the Schengen. ‘What’s Schengen’, you ask? Schengen is an immigration agreement among many (but not all) of the countries of the European Union (and some non-EU countries, just to confuse things). It is the rule of law that governs, among other things, how much time a person NOT from one of these countries (like us, being from the US) can remain in the countries which are part of this agreement. We, as US citizens with US passports, are only allowed to be in the Schengen area for 90 days out of the last 180 days. Last summer, we got extended-stay tourist visas from France and this allowed us to spend almost five contiguous months in France and other Schengen countries. Montenegro and Croatia are not part of Schengen (though Croatia is part of the EU and Montenegro is hoping to be part of the EU soon).  Because we wanted to visit both of these countries this summer, we decided to count our days carefully and stay under the 90 day Schengen limit. Getting visas is a lot of work that we hoped to avoid for this summer! The second half of our summer plans have us spending two months in Greece (a member of Schengen). Add to that the three weeks we have already been in Italy and we’re needing to be careful with each day! Therefore, we NEED this ‘time out’ and it needs to start soon!

With the strong winds having abated, it was time to leave the comfort of the marina at Santa Maria di Leuca and round the heel of Italy. This turn took us from the Ionian Sea into the Adriatic Sea and helped articulate how much distance we will have covered upon arriving in Montenegro! Just two weeks earlier, we departed on Sea Rose from where she wintered in the Tyrrhenian Sea (center, west coast of Italy). But I’m getting ahead of myself – first we need to cover the 169 miles from the bottom of Italy’s boot to the Gulf of Kotor and the Montenegrin customs and immigration dock!