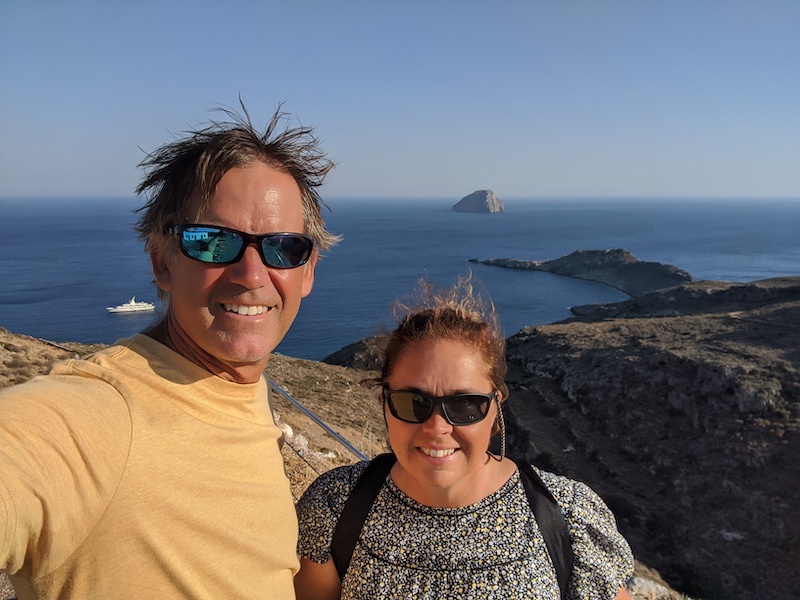 Sitting at anchor in Gramvousa, on the island of Crete, with the prevailing northerly winds howling down on us, and a long upwind climb in our near future to get up to the Peloponnese, it felt a little like being stuck in a sink hole. Cruising down to Crete had only exacerbated our upwind challenges. But it was worth it. We had hiked the gorges of Crete’s interior, ambled through narrow stone-lined alleys of historic villages, sipped the nectar of its burgeoning wine industry, and swam through the rusting hulks of not-so-long-ago shipwrecks. Now we had to pay our dues.

My sleep had been restless on the days leading up to our departure, as we watched the weather, a continuous looping forecast of steady northerlies with the added cherry of darkening clouds and threatening rain. At anchor in Gramvousa, it was hard to avoid the trepidation that this isolated outpost brought on. We had 45 miles of open sea to cross to get to the southern tip of the Peloponnese, the first step of a 250 mile climb out of the sink hole to the central Ionian islands. As we discussed our plans with fellow sailors, they gave that mixed reaction of concern and doubt, like we were literally and figuratively going against the tide. Of course, most sailors knew that the logical way to navigate the Peloponnese was south and east. From Santorini, it would have not been a lot of work to close reach northwest to the Corinth Canal, thereby avoiding the whole Peloponnese. But we had already done that route. So, we watched the weather like a hawk. Hiking up to the citadel at Gramvousa gave us one bar of cell signal, a special gift for this far-flung hunk of rock. After two nights at Gramvousa, we had a possible weather window. The strong Meltemi wind was curving ever so slightly, giving us a little northeast wind for our slightly northwest route to Kythira. If the wind direction held, we might be able to make it with Sea Rose as close-hauled as an America’s Cup contender.

The first challenge was leaving the anchorage. Scattered along a line emanating from the island were a series of rocking outcroppings, some clearly visible by the frothy white water, others lurking just below the surface. These same rocks could very well have been the demise of the ship wrecked on the shores we had just left behind. I headed to the foredeck to be our bow watch, while Karen guided us from the cockpit, keeping a close eye on our chart plotter. The waves out to sea didn’t look that bad. Yes, they were bigger than normal, but they seemed manageable. How wrong I was! We had rigged our storm jib before weighing anchor, and as I went forward to unlash it, the pitch of the bow, up the front of one wave, and down the backside, was launching me into the air, clear of the deck! I had attached my tether to our jacklines, but these safety systems are designed to still give you freedom of movement around the foredeck. Up and down I flew off the deck until the jib was free, and a shuffled briskly, crouched low with knees bent, back to the safety of the cockpit.

Thankfully, the storm jib raised flawlessly, and together with a reefed mainsail, we were able to shut the engine down and fine tune our course. During these times, it can take a minute or two for a sailboat to build up its momentum. In the meantime, you are bobbing around like the proverbial cork on the ocean, at the mercy of the waves. We looked at each other with a face of dread but tried to remain positive. As Sea Rose built speed, she cut through the waves a bit better. We were able to hold our rhumb line course to Kythira, which for now ruled out the need for tacking. As our speed improved, Sea Rose would aggressively ride up the face of a wave, causing the bow to become airborne enough to lead to a shuttering crash as the flat bottom surface of the hull landed down in the trough, sending lots of white water out horizontally on both sides. You could feel the entire hull reverberate, making us worry we were causing excessive stress to the very structure that was keeping us afloat. And if it wasn’t stressing the hull, it was certainly stressing our heads! We had at least eight more hours of this upwind slog to contend with. We debated turning around, but while the comfort of an anchorage was tempting, the headwinds would be even worse in the coming days.

Slowly the miles ticked away. We spelled each other at the helm every hour, but with the rough conditions, there was little to do on the off-watch but cradle yourself in the upwind corner of the cockpit. I actually looked forward to my turn at the helm, as the occupation of my mind pulled it away from feelings of seasickness.

Soon we were passing in the lee of Antikythira, a gray mountainous hulk of an island that looked quite unforgiving. A lone lighthouse confirmed that people had at one point set foot here, but in its remoteness, it seemed like it could easily be Terra del Fuego. Ironically, the wind completely died in its shadow, and we were forced to motor-sail, that is until we rounded the northern tip and got slammed again as the wind was squeezed around the island.

We settled into our watch rhythm again, with the gift of a slight wind shift to the east, allowing us to ease the sails from their close-hauled, flat-as-a-butcher’s-knife shape. Our little storm jib was a godsend in these conditions, allowing us to reef or unreef the mainsail as the wind strength demanded. The waves continued to build in size as the day wore on, as a result of the long fetch of sea from the Aegean islands. As we negotiated Sea Rose over a particularly large wave, its crest broke against the windward side of the hull, sending white water over the top of our bimini! That was a first for us.

On the hazy horizon typical of these unsettled days, we could start to make out the outline of Kythira. Hallelujah! It couldn’t come soon enough. In my foggy, fatigued state of mind, all I could see was a large motor yacht taking up all of the space in Kapsali, the southernmost anchorage. But as visibility improved, we could see several other like-minded sailboats peacefully swinging on their anchors. We dropped sails and motored around to find an open spot. Many eyes were on us as we circled, and one crew yelled across to ask how the conditions had been. They had been waiting all day to just go around the corner of Kythira.

I used the excuse of checking the anchor to jump overboard and cleanse myself of the stress of the day. We weren’t out of the woods yet, but we had crossed the trickiest, most exposed, stretch of our climb north. How wonderful it felt!

Karen and I didn’t want to waste the remaining daylight so we were soon dinghying ashore to find European tourists-a-plenty enjoying a little time under a beach umbrella here, a stool at an outdoor bar over there, and a slow pedal of a beach cruiser bike in front of us. We learned later that this out-of-the-way Greek island had recently pivoted to a refuge of the well-heeled young. Our hike up to the top of the town confirmed this, as we took in the sweeping mediterranean views with smartly dressed couples, some of whom we would dine next to later in the evening amongst the well appointed outdoor cafes. Even a pandemic couldn’t stop the march of progress here!

Kythira put us within striking distance of the actual Peloponnese coast, and we set out the next morning to make it so. Our goal was the perfectly oval shaped harbor of Elafonisos, but to get there we had to cross the busy shipping lanes north of Kythira. Tankers, containerships, overnight ferries – ships of all types navigate through this narrow passage as they head between the east and west of the Med.

Like a pedestrian waiting for a break in the traffic before crossing a busy street, we found an opening and jumped at it. Entering Elafonisos shortly after, we found plenty of shallow water options amongst the existing sailboats and easily settled Sea Rose down for the night. To our surprise, ashore was a beautiful sandy beach, with a thin isthmus that led to a bluff made of velvety soft sand dunes – a rarity here in Greece – where we joined the youth of the world to enjoy the lingering glow of the sunset.

With the setting sun, we also close a chapter in our summer sail, saying goodbye to the distinct and non-conformist beauty of Crete, and to vigorous airborne days of open water sailing, to begin a new chapter of coastal hopping the Peloponnese. We knew nothing about this area of Greece, but our pre-reading was giving us a glimpse into a tantalizing future. It was time to rest up for more adventure!