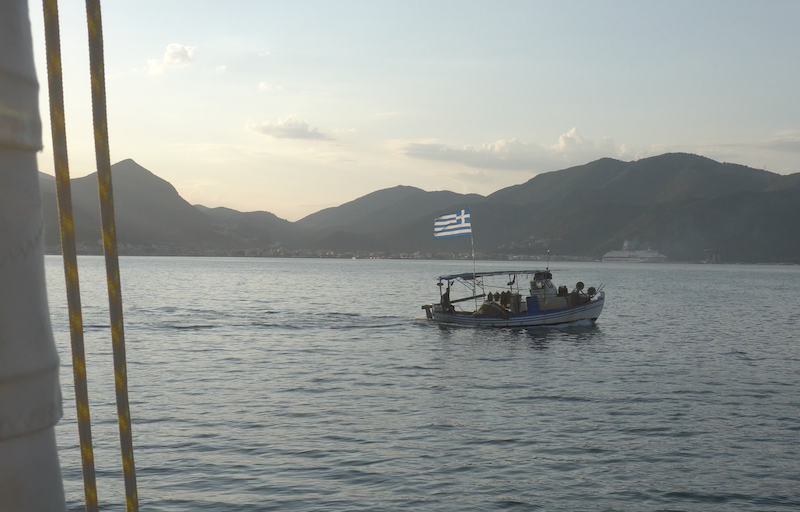 We had taken every reasonable precaution, and now, as the medicane churned its way towards the Ionian Sea on a northeast track, the next 48 hours would determine if we had made the right decision. As often happens with an approaching storm system, the skies and the wind were quite benign. It was almost like the storm was sucking the energy out of the region, feeding it to the hungry monster within. A dull gray upper atmosphere draped over us, a rare sight in the summertime Med. And barely a ripple formed on the water, as we settled into our anchorage. We were over a mile from the harborfront of Igoumenitsa, and well spaced from the shoreline surrounding us. I had worried that other boats seeking shelter would logically aim for this harbor too, so well protected as it was. But only three sailboats joined us, in a space that could easily hold 50 or more. If the high winds made it this far north, we wouldn’t have to worry about other boats dragging on their anchor, and their detritus cast onto the sea surface. We would just have to worry about ourselves, while waiting out our fate.

Igoumenitsa has a reputation for not having much of a reputation. Nothing notable was written up in the cruising guide, and with the constant stream of passenger and car ferries, some as big as cruise ships, it would be easy to conclude this was just a waypoint on a voyage to more interesting locales. And I would have been fine with that. All we really needed was protection and safety. But the guidebooks were wrong, plain and simple. Here was a city whose waterfront was lined with cafes and tavernas. One block inland was a broad, pedestrian-only street full of shops, boutiques and galleries. At every corner, it seemed, there was a mini-market with a kaleidoscope of colorful produce, begging to be weighed and taken to a good home.

Travelling with a proud Greek can be dangerous for your dining budget, and Theo in particular really wanted to show us how to properly experience the Greek taverna scene. We begrudgingly obliged! On our first evening in town, he insisted that we grab an outdoor table and sample a few local meat selections, despite the fact that Karen and I had already eaten dinner onboard. Granted, those had been cold leftovers, and at the chosen taverna, multiple rotisseries were in motion behind full height glass windows, leaving you no doubt how quickly the glistening seasoned meat, with its dripping fat, would slide down to a happy stomach. Theo carried on with the waitress, leaving us in the dark on what exactly he ordered. But I didn’t complain when pieces of souvlaki, gyros and some other style of rotisserie pork showed up in the center of the table to share, all with a dark crispy brown outside and fall-off-the-bone texture inside. For a brief moment, I wondered if this could be better than sex!

On the morning of our second full day of waiting, we awoke to dark gray skies and a light rain. After several seasons in the Med, I felt like we were a fair judge of clouds and their dangers, and these gray skies running from horizon to horizon looked manageable as they slid by at a high altitude. The local fishermen seemed to agree as they motored past us, although I imagine it would take quite a storm to hold them in port.

We continued to follow the medicane. With 24 hours to go before it struck land, the models were starting to agree on a track just south of Zakinthos. With this track and counter-clockwise winds, it would hammer the eastern shores of Zakinthos and Kefalonia, and the southern part of Levkas where we had just left. At winds in the 80 knot range, significant property damage was no doubt in the cards for these island communities. As I thought about the boats we had seen sailing south from Corfu directly into harms way, I couldn’t help but recall the parallel images of firefighters climbing the stairs of the World Trade Center towers, past franticly escaping occupants, just before the collapse. Except in that case, it was sheer bravery in the pursuit of saving lives. Here, these boat captains ignored the ample warnings, putting themselves and those around them in imminent danger.

The rain continued on and off throughout the day, but never producing more than a gentle sprinkle. The forecast called for periodic winds in the 25 knot range, but as I relaxed in the cockpit, I thought about how inaccurate it was. As if the weather gods were listening, fresh ripples immediately grew on the water’s surface and the wind started gusting to 15 knots, the most it had blown all day. Go figure!

And on and on the light rain came. To battle cabin fever, we served up a specialty of the house – Sea Rose Martinis. Ample amounts of fresh squeezed lemon and lime, vodka, and a splash of the seltzer of your choice, served over ice.

The next day, reports started coming out on social media of the damage and mayhem to the south of us. Our friends David and Allison onboard Living The Dream were tied to the dock in Zakinthos town when the full force of the medicane struck. Among the damage was a sailboat next to them that took on water. The solo sailor called for help and David and Allison helped him offload his possessions onto their boat – all he had after selling everything for a planned shoe-string round-the-world voyage. They all watched as his boat sunk at the dock and drifted precariously under Living The Dream.

Kefalonia, specifically the harbor at Sami near where we had coasted along with Theo just three weeks earlier, was hit extremely hard. Boats dragged anchor, broke from their moorings and sank. Heavy rains, running down the steep slopes of the interior, caused flash flooding, destroying tavernas and washing away beaches, leaving behind a trail of dark brown muck. In the end, at least 25 boats were sunk completely, with many more suffering severe damage. Masts were protruding from the water at odd angles throughout Ithaka, Kefalonia and Zakinthos. The chill windsurfing town of Vasiliki that we had rushed out of earlier in the week was dealing with widespread destruction to their waterfront businesses. A total of four people were killed and one person was missing, with damages in excess of 200 million USD. We felt horrible. The Mediterranean is just not as prepared for wind damage from the equivalent of a Category 1 hurricane as other hotspots like Florida, the Caribbean, and Southeast Asia. We were safe and sound, and the skies were starting to improve in Igoumenitsa, but our sadness lingered over the tragic loss of life and property. It would take this beautiful gem of a region a long time to recover. Meanwhile, we prepared for the arrival of our first and only official guest of the summer, my friend Pedro from Germany. The wait was finally over.