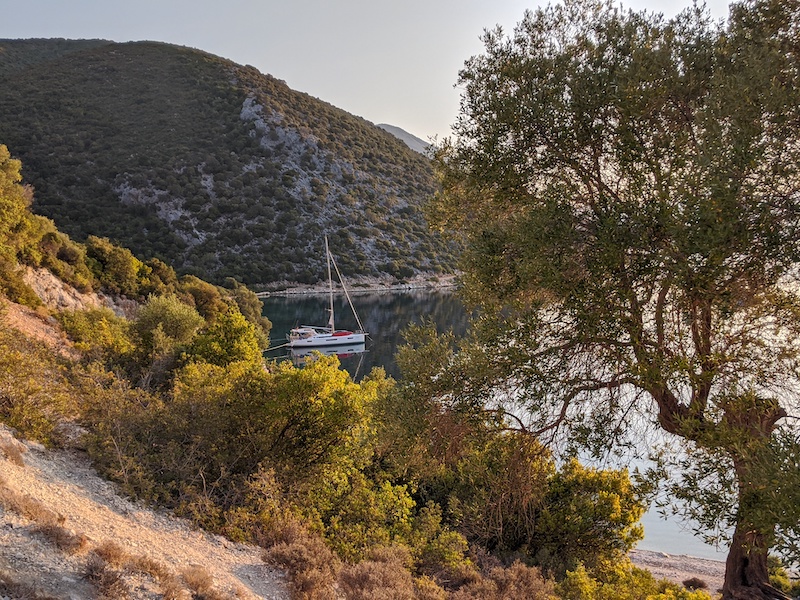 I had thought our tribute to Mother Nature was respectful enough. But as we tossed off stern lines to leave One House Bay, Mommie Dearest would not let go of her grip. I had used a heavy duty length of chain around a submerged boulder as a tie off for one of our stern lines. The line untied without a problem, but when I sucked in air and dove down to collect the chain, it would not budge. I dove a half dozen times and even tried to wedge a boat hook in between the rock and chain, but this beautiful piece of galvanized chain was going to have to serve as our tribute payment. Rest in peace, and may you soon come to the aid of another boater’s stern line!

After 7nm of light sailing north, we came upon the island of Kastos–a long, skinny, lightly inhabited island close to the mainland. Last summer, we had read about how Kastos, and its neighbor Kalamos, were on a little more of the road less taken, but we couldn’t fit it into our itinerary at the time. We now had ample time – a full four weeks until we hauled out at Preveza just one full day’s sail north. About midway along the eastern shore, a single old windmill came into view on a bluff. Looking like it had been plucked from Mykonos’ row of classic windmills, the bluff protected a small harbor and town quay. With a steady breeze blowing offshore, we skipped the quay and chose to anchor in a nearby cove that might give us more air to cool down on this hot Mediterranean afternoon.

Kastos Town was a sleepy little hamlet, but after several days living ‘on the hook’, it felt like we had hit the mother lode. A tavern right at the ferry landing caught our eye as much for the shade as for the scenery. I didn’t even get a chance to look at the menu, as Theo rattled away in Greek to our server and just said, “I ordered a couple of traditional appetizers; you’ll love them!” With a kitchen and staff prepared for crowds of tourists, our food and drink came out in a flash, and Theo did not disappoint, as we divvied up fried zucchini balls and boiled greens. I have to say that boiled greens would have been last pick, reminding me of what my mom would serve in our household when fresh vegetables were out of season. But they were melt-in-your-mouth delicious. They even tasted reasonably well after Theo spilled his beer in them. It was a move I’m famous for and I was just glad it wasn’t me!

After a swim, we returned to the little village for an evening stroll. I was trying to think how I would make this town any better, but I was coming up empty handed. The town quay was full of sailboats, maybe 20 all together. Together with other boats med-moored in the harbor and in our cove, there were at least 40 boats here. Yet, it didn’t feel at all overrun. The lights of the boats were reflecting on the water like slowly blinking sentinels. A gentle breeze carried through into the late evening, rustling the leaves of the many olive trees climbing up the gentle slopes. If my book-writing venture fell flat in Assos, this little village was a magical second choice.

Up the coast a few miles we found many options for anchoring out and getting back ‘in the rough’. Even the sighting of a sleek, black, maxi-yacht did not deter us. We had seen many of these gargantuan power and sail boats this summer, anchored out for days with only the crew visible. My hunch was that their charter guests or owners were held up with Covid restrictions, leaving the crew to lull away the days waiting for a cell phone call. Not a bad gig!

We picked an unnamed cove to anchor at off of a long beach occupied by more goats than humans. You never know what you are going to get when you drop the hook, and we tried several times to get the anchor to hold unsuccessfully. Finally, another boat in a prime sandy spot took off and we swooped into set our hook on the first try. This left the question about where Theo should anchor. He eventually got settled himself, but not until he hooked a massive chunk of rock. I was impressed as much by the strength of his windlass as I was the size of the rock. Paloma was indeed fitted out well for a global voyage.

Kastos is the baby sibling of larger, more mountainous Kalamos. We landed at the most logical spot on the island, Kalamos Town, a popular stop for charter boat flotillas. These flotillas are groups of boats from the same charter company that provide a set itinerary for the week and usually at least one paid skipper on a lead boat. It’s great for the patrons, with the obvious benefit of safety in numbers, plus the ease of relaxing with so many other sailors. The villages love it too. With the town quay at Kalamos Town filled as it was with at least 15 boats, it means there’s plenty of euros coming into the local merchants. But it wouldn’t be my next book-writing venue. It had a tired feel about it. We really needed fresh provisioning, but most stores were closed, and the only market open charged a lot for the privilege of digging through crates of rotten produce. Perhaps all of the good food had been diverted to the tavernas for the flotilla customers.

It’s quite possible that ‘tired’ was the overriding theme of the whole island, as our destination for the evening was a little town at the southern tip named Gerolimionas that purportedly had been abandoned after an earthquake in 1955. At the entrance to the anchorage, two stone towers had likewise decayed into half circle remnants. But the intrigue of an abandoned town had drawn the curiosity of a dozen other boats, as we settled our stern into a rocky bank full of scrub brush and olive trees.

I was eager to get ashore to see what was left of the town. I was picturing a Hollywood movie set with tumbleweed blowing across the dirt road, half-finished dinner on the table behind a front door off its hinges, maybe even an overturned ox cart with its contents scattered into a ditch. It wasn’t quite like my imagination, and there was a bright yellow Catholic church freshly painted since 1955. To be honest, though there were several destroyed buildings, ruins were a sight so common in Greece that I could easily have missed this town’s storyline. Having experienced a horrific earthquake in California, though, I can imagine the strife and trauma of having to abandon your village. Yet like the spring foliage after a deadly forest fire, every disaster brings an opportunity for re-birth. It was good to see that at least this part of Kalamos was on the road to recovery. Godspeed!