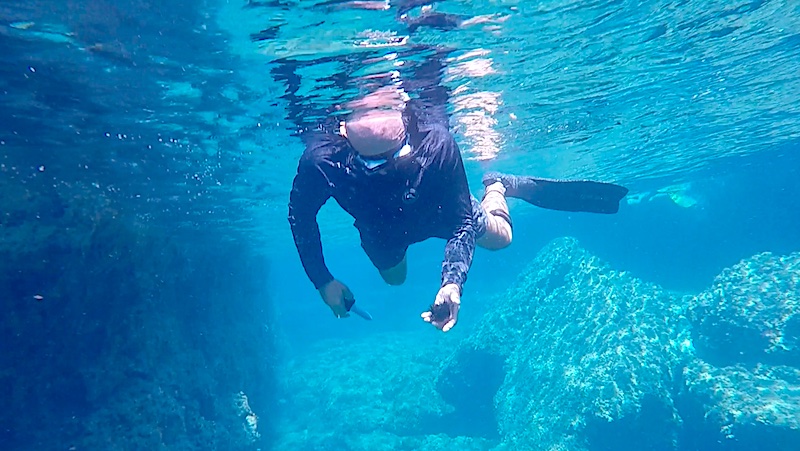 There should be no shame in a Plan B. Sure, there’s the difficulty in accepting one’s fallibility. But we’ve found that if we think ahead about possible Plan B’s, it’s easier to make the switch when Plan A develops an attitude. And, an attitude was what we were faced with as we rounded the northern tip of Zakynthos for Shipwreck Beach. As soon as we pointed Sea Rose towards the alternative of neighboring Cephalonia, the sea sickness subsided and the curiosity about a new island emerged.

No wild animal profile jumped out at me when I looked at Cephalonia on the chart, yet unfolding right before our eyes was a steep, rugged island, with a gently tampering, exquisitely verdant shore. To the west was Argostoli, purportedly busy with cruise ships, so we opted for the little seaside town of Spartia immediately north. The harbor was indeed more low-keyed, but we did share the anchorage with a shockingly large super yacht. This can be a good sign – that we both have great tastes in out-of-the-way Greek sites – or a bad sign – that we’ll be buzzed by jet skis and launch boats all day long. Maybe they were also reluctant to share the anchorage, as they were soon firing up their power plant and steaming out into the open sea. We were solo only momentarily, as Theo and his craft ‘Paloma’ motored in and saved us from being alone. It was official. We were now buddy boating!

As a testament to how windy it had been earlier in the summer, it was only today–seven weeks into our summer sailing excursions–that we got around to launching our inflatable paddleboards. In the Aegean, or on Crete, it’s quite possible we could have been blown offshore and never heard from again! But on this bright sunny day in the placid Ionian islands, a paddleboard was the perfect way to discover our new Ionian island. As if to confirm our choice in boat buddies, Theo pulled out from the bottom of his cavernous lazarette the identical make and model of paddleboard. It was meant to be!

The first feature that catches your eye in Spartia is the near-vertical sandstone cliff towering over the anchorage. It would make for a perfect geology class field trip, with its layers-upon-layers of sediment.

Close to shore was a small, uneven concrete jetty, providing access to the collection of little Greek fishing boats moored nearby, as well as providing a few families a chance to site their folding chairs and to play the game of “I’m watching you sailboat people, but I’m going to pretend I’m not really watching you.”

It was Karen’s birthday and one of the reasons I chose this harbor was the proximity to a taverna ashore. After making reservations for dinner, all three of us headed in our dinghy to check out the local snorkeling options. Theo, in his exploits to the South Pacific, had done considerable amounts of scuba diving, so I didn’t need to worry about him. But I did worry when he showed up with a large knife in a leg holster. Rubber dinghies don’t like sharp objects like knives, nor does one (unarmed) human getting to know another (armed) human! But I had called him a buddy boater so I had better walk the talk. In fact, his knife was specifically made for diving, with a dull point that he demonstrated could not harm a hand or leg. Further, said knife was handy for prying a sea urchin free of its rocky home, and for carving out the underbelly to reveal the delicacy of eggs inside. Theo was quick to point out these eggs – called Uni (oo-nee) in the lingo of Japanese sushi – were hard to turn down, once you got used to them. It was fun to watch, but I left Karen to be our family taste tester.

Lining the little harbor at Spartia where collections of young kids diving off the jetty and splashing around in the shallow clear water. With cries and squeals of youthful joy, it could have easily been summer at any little shoreside dock across the world. In that way, the worry-free pleasures of summer vacation are boundless.

With Karen’s birthday falling in the summer months, it can be a challenge to find the right way to celebrate, given our vagabond lifestyle. But I think I pocketed a few extra ‘good spouse’ credits with my choice of birthday dinner in Spartia. We showed up at the one-and-only taverna, with sweeping views of the harbor, and took our seats at the reserved table – the only reserved table and further more the only patrons in the entire multi-terraced restaurant. I had done my research and knew the meal was going to be excellent, so it could only be due to Covid. It’s hard to see the wait staff, the multiple bars and bartenders, all standing by for the crowds that won’t be coming this year. There’s only so much enthusiasm and gratitude you can show as a customer. At the end of the day, they have to hope and pray for a better summer next year.

In the morning, it was time to move on. I had set a stern anchor to keep Sea Rose pointed into the onshore swells overnight, and with a shift of wind, the stern anchor had now become our primary anchor. While I was pleased that the little 7 lb Fortress anchor was taking the task in stride, the only way we can raise our stern anchor is by hand, from the dinghy. With dread, I moved myself out to the anchor in the dinghy, and with gloved hands, leaned over and pulled like my back was 30 years younger. No movement. Then I just kept a firm pressure on the line while the dinghy bobbed up and down. This subtle motion was enough to break it free. I was certainly glad we were not using a stern anchor everyday!

Our destination was the harbor of Kato Katelios, just down the coast before it turned northward. Theo had been here last summer, and warned us of numerous rocks, many uncharted, dotting the shoreline. We poked our way in slowly and after setting the anchor, we swam a wide perimeter area. Sure enough, there were rock ledges just below the surface beyond our swing radius. It felt good to at least know where they were, rather than wonder and worry in the middle of a pitch-black stormy night.

We were expecting another boat to join us later in the day – a young couple that Theo had met a few weeks ago – and we killed time with a walk and provisioning trip ashore. Kato Katelios was tiny but still had several tavernas and a couple of mini-markets. Back home, a mini-market was the kind of place you might find at a gas station, with more options for motor oil grades and salty snacks than anything that you could use to cook a dinner. But here, mini-markets come with a fine selection of local wines, cheeses, meats, and most pleasingly, an abundance of produce spilling out of wooden crates street-side. It was simply a down-sized regular grocery store, with the quality as good, if not better.

In the afternoon, Theo’s friends onboard the catamaran ‘Butters’ sailed into the anchorage and joined us. It was great fun to meet Marin and Isabelle, a couple who had just recently left their tech jobs in the San Francisco Bay Area, bought a boat in Croatia and started on an around-the-world adventure worthy of much jealousy from their friends back home. Being new to sailing, they were a sponge for boating knowledge. And we were a sponge for their excellent cooking skills. When a boat pulls into an anchorage named Butters, and they invite you onboard for sautéed calamari over risotto, the decision is pretty elementary. For Karen and I, it was a trip back in time as we exchanged fun stories of living in San Francisco and working in tech. And to be perfectly honest, I found myself wishing I had sold everything at their age too and headed over the horizon. At that time in my life, I was grinding away at IBM instead of being an early developer at Lyft, so options were limited. But, hey, I got a closet full of white, button-down dress shirts out of the deal!

We left Theo to party with the youngsters as we departed in the morning to work our way up the east coast of Cephalonia, with promises of rendezvousing soon enough. Cephalonia, as the largest of the Ionian islands had plenty more pearls of beauty to share with us, and we eagerly prepared for the adventure.