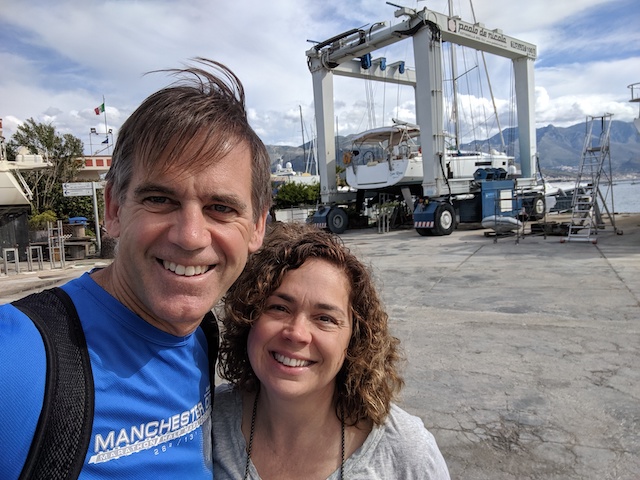 For most boaters, springtime does not come quick enough. Like a skier waiting for the first flakes to appear in the Fall, the warm sunny days of Spring herald a new beginning of the boating season. And whether you are in New England or Italy, the feeling is palpable. In years past, stewards as we were of a 20 year old boat, Spring also meant a rush of boat projects, many of which were critical path for launching. Thankfully, with Sea Rose at the young age of 12 months, and having broken her in for 6 of those months on the water last summer, our critical-to-launch list was modest. Our biggest project was the installation of a water maker. These miracles of modern technology take saltwater, even the saltiest of saltwater that settles in the Med, and turns it into beautifully clear, clean drinking water (and showering water, and leave-the-tap-on-while-doing-dishes water, gasp!). We had fitted out Sea Rose quite sufficiently, both from the options we picked through Jeanneau, and our own work efforts last summer. Recently, though, having a water maker was feeling like more of a necessity. If we stayed at marinas every week or so, we could most often fill up our two water tanks and have enough to last for the next week. However, some marinas had questionable water quality, others charged for water; and let’s face it, boaters are an independent lot and don’t like to rely on much from the outside world. So, over the winter I set about researching water makers. For a data scientist guy, this task needed to start with a robust spreadsheet of the many specs and costs. With all the research in hand, we settled on a modest sized unit from Spectra that produces 8 gallons an hour and was light on its energy needs, at just 10 amps. The problem with most water makers, or de-salinators if you want to be exact, is that they take a lot of power. They work by forcing seawater at very high pressure through a fine membrane, which separates the dissolved solids and leaves you with fresh water. It’s more brute force than rocket science. Traditionally, you had to install a generator to get enough power to run the water maker. But we had no interest in another internal combustion energy producer onboard, and opted for the small Spectra model that could run off of our solar array. The Spectra dealer in Florida was more than happy to ship the unit to us in New Hampshire, but happy is not what I would describe Karen’s face when they lowered the unit from the truck bed, shrink-wrapped to a big pallet. “How the he** (could be ‘heck’, mind you!) are we going to get that on the plane”, my newly christened sea captain wife inquired! The optimist and the realist in our household had to huddle and agree on a plan. It just so happened that if you unpacked the pallet and its pieces, you could fit the contents into three large duffle bags that are ever so slightly over the 20kg weight limit for Norwegian Airlines. Phew! There was even room for some of Karen’s clothes, so she wouldn’t have to be forced to skinny dip like those crazy Europeans on summer holiday!