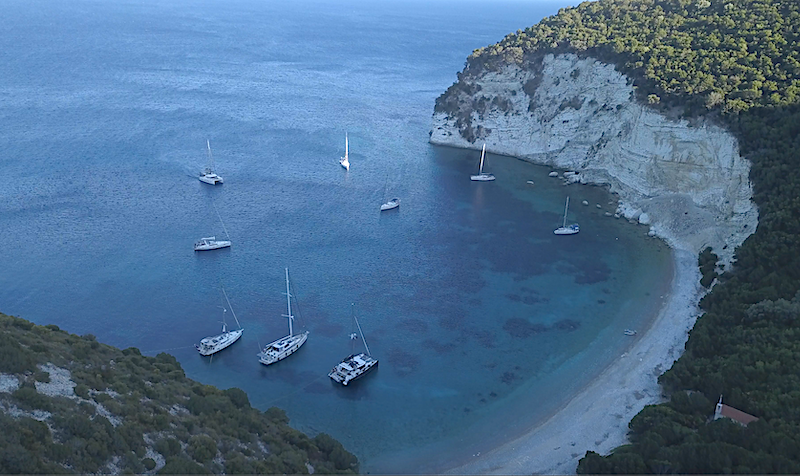 I’m pretty sure the seasickness I was feeling in the morning had nothing to do with the late night with new friends. There was a change in the wind and a swell was rolling into the anchorage. I assure you this was the only reason! We had dropped our lines and were underway by 7am for the island of Atokos, 7nm distant but looking so close it seemed like you could reach out and grab it, the air was so clear. Just enough wind was blowing to make killing the engine a simple decision; we sailed gently onward, at a time in the morning when we would normally just be rustling out of our bunk.

Atokos is a small but steep island, with one main spot to anchor named One House Bay. It’s a convenient stopping point on the way from Ithaki to the mainland and other nearby islands. Perhaps for that reason, as we approached One House Bay, another boat was pointing their bow towards the same spot, and making their intentions known by their rate of speed. Theo was ahead of us, and we politely asked him to hurry up so we wouldn’t lose out on space to anchor! He was ahead of the other boat by just a pinch, but clearly they were trying to over horsepower their way in. Someone had to back down, and eventually the other boat did just that, leaving the two of us time to circle and set our anchors and reverse to the shore with stern lines. Med mooring was starting to become second nature. With two heavy duty straps and two lengths of chain, we could rig up four stern lines quickly and safely.

Ashore, the main entertainment was the local wild pigs. Last summer, there was just Mr and Mrs Piggy. Over the winter, they had gotten busy, and now there was a whole family, rolling around in and out of the water to cool off. The siblings took a particular liking to our paddleboards, but I’m pretty sure the warranty excluded feral pig attacks, so I hastily shooed them away.

As best we could tell, the one house in this One House Bay was also the only house on the whole island. I flew the drone inland a ways and saw no signs of civilization. I thought, as my toes wiggled into the loose pebbles at the water’s edge, just how rare it is with today’s constant growth in population to find an island unpopulated and given over to wildlife. That is, if you don’t count all of the boats that were continuing to pull into this small cove. Two boatloads of locals beached their fishing caiques right next to us, and started offloading coolers, cookers, and a boom box. Two of the younger kids had also brought sleeping bags with plans to beach it overnight. It was hard for me to not show my displeasure, especially when they started being rough with my new pig family. But, hey, this was their country; I was just a visitor. It was entertaining watching Theo strike up a conversation with them. They could understand his Greek but they would also pickup something else in his intonation, likely from his many years in the U.S., and they would press him to find out if he was truly a Greek native, or whether he was an American that learned Greek. Poor Theo, in between nations, without a home!

The two boatloads abruptly changed plans, packed up, and left, and we waved a pretend wave of sadness. Phew, nature was taking over again!

Only a light ripple rose on the surface of this teal-colored bay of Eden. We set out on paddleboards to check out the adjacent cliffs and rock outcroppings. The swirling and twisting of chalky white layers in the rock were breathtaking. Indeed, for me, it also left me traumatized. As Theo pointed out the plethora of rocks embedded in the sedimentary layers, I looked up, lost what little balance I had on the paddleboard, flipped over backwards and fell in the drink. Paddleboarding can be a humbling experience!

Back onboard for the continuation of our geology lesson, I thought how much easier it would be for fidgety school kids to learn science by being right in Nature instead of seated in rows of desks bolted to the floor. For instance, can you imagine the plate tectonic forces at work to shove these layers of rock into a completely vertical orientation?

Or, these sheer rock cliffs, angling out of the sea like a giant on ramp, with mature trees clinging to the edge, somehow burrowing their roots into cracks to find sustenance.

Around the southern tip of Atokos is Cliff Bay, the only other anchorage on the island, with only one boat there as we visited by dinghy. The explorers that first named this spot were not one’s tempted by exaggeration. It looked like someone had come along with a gigantic meat cleaver and lopped off the end of the island. We donned our snorkeling gear and dove in without delay. I was not prepared for the sheer abundance of natural beauty both below and above the water. If this was the continuation of the geology lesson, I felt like the school kid clambering for a front row seat, leaning forward, locked on to every word and picture from the instructor.

Back onboard Sea Rose in One House Bay, the light was fading and it was time to start planning for our next island destination. But the Atokos Science Teachers Association had one more lesson plan for us. This time it was physics, or more specifically, how a collection of goats can define gravity on a cliff face. After dinner, we heard some bleating sounds in the distance and sure enough, on the other side of the anchorage were three black goats clinging to the side of the cliff, yet moving with the carefree agility warranted of a stroll down a wide suburban sidewalk. Pigs rolling in the water, trees growing out of crevices, goats traipsing across a cliff edge – why bother reporting to class!