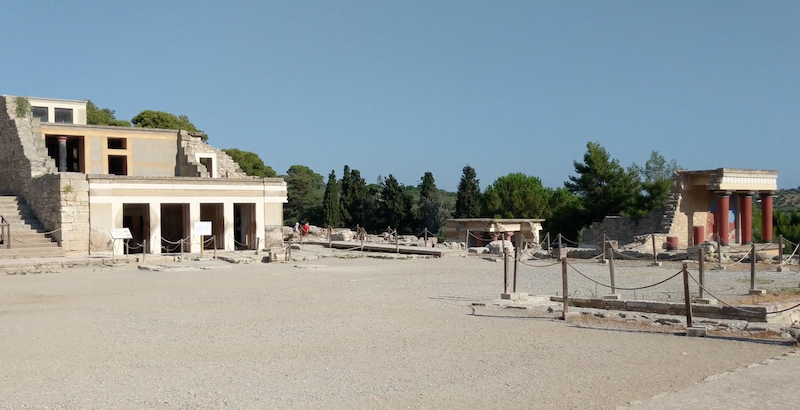 We were interviewed recently by Jeanneau America for an expose on what owners do and see with their boats. As we sat on the shores of Newport, Rhode Island, explaining our exploits in the U.S. onboard Thalia, and now onboard Sea Rose in the Mediterranean, our host Paul remarked on how we must be big planners to accomplish these sailing goals. And in general Karen and I are pretty serious task masters, fortified by our many years in corporate America working to get project teams focused in a common direction. But as we awoke at dawn inside the caldera of Santorini, and pointed the bow of Sea Rose south, we were living like carefree teenagers. Crete, about 65 miles distant, was big, downwind, and a place we knew nothing about. So we decided to sail there. Simple as that!

Many destinations had been out of scope for our westbound march out of Greece, in the pre-Covid19 planning talks we had over the winter. But this was a new game. We weren’t going to make it to the English Channel by the end of this summer as originally intended, and Greece was taking good care of us, so we dialed back our hit list, with a determination to see more of the Greece we loved.

Crete is a part of Greece, but like other large islands owned by mainland parents such as Corsica and Sardinia, the Cretans have a loyalty to their island first, and to the greater Greece nation second. It’s not like they harbor any animosity towards Athens. Their island has been fought over and occupied by far too many foreign powers, even by European standards. There were the Byzantines, the Romans, the Venetians, the Arabs, the Ottoman Turks, the Germans during WWII, to name just a few. Yet, the Cretans were some of the first to send personnel to fight for the Greek War of Independence starting in 1821. Ironically, major civilization on the island started with the Minoans, who were renowned for their peace-loving nature. We were to tour the remains of the Minoan palace of Knossos in a few days and revel in the fact that very little in the way of defensive equipment – forts, castles, spears, cannons – were found during the archaeological digs. I couldn’t wait to discover this island and understand further it’s contrasts and contradictions.

We unfurled the jib and tried motorsailing, as the dramatic silhouette of Santorini faded to our rear. Before long the forecasted northwesterlies kicked in and allowed us to replace the engine with full main, jib and a splendid 6 knots of beam-reaching speed. Indeed, we put the boat on autopilot and had to do very little in the way of sail trimming, as the steady 10-15 knots of NW wind blew blissfully all day, until we were within 5 miles of the Cretan coastline. Not since we had entered the Aegean had we been given a gift of such pure and easy sailing.

As we motored the final approach into Porto Gouves, a small privately run marina affiliated with an adjacent hotel complex, we were warned by the lone marina attendant to stay close as we rounded the breakwater-protected entrance. This was sage advice, especially for a pair of attention-fatigued captains who had been on the water all day. Large breakers crashing onto the town beach were just a boat length to our port side, ready to swallow us up if we didn’t execute our turn properly. This was all exacerbated by the fact that, with me on bow watch yelling back to Karen to ‘stay 10 meters off the breakwater’, Karen thought I meant to ‘stay at least 10 meters off the breakwater’, a prudent approach near most breakwaters where the boulders and rip-rap can extend out further underwater, like the hidden underwater dangers of an iceberg. But in fact I meant to say no further away than 10 meters, as the marina attendant warned me it got very shallow near the beach breakers. We got on the same page quick enough, but it reminded me of cockpit voice recordings between pilot and co-pilot right before a crash. We vowed to be more specific in our wording, and in these critical situations, to ask the other to repeat the directions back as a form of confirmation.

The Porto Gouves marina looked like a scene from ‘The Day After Tomorrow’, with only three other boats in the water, weeds growing up in the cracks on the pier, and a vacant and dark hotel building across the frontage road, having never opened for the session. After weeks of crashing into big seas under reduced sail in the Aegean, Sea Rose was coated everywhere with salt, and we took advantage of the unlimited water supply to thoroughly wash down the entire exterior, giving the salt no respite from our high pressure hose. Finally, Sea Rose was back to being a proper lady again. Whenever we do these big cleanups and re-provisioning at a marina, my thoughts shift to an expedition party coming back into civilization from the wilds of the backcountry. We are largely self-sufficient onboard Sea Rose which allows us to explore remote anchorages and make long passages to experience the beauty of Mother Nature up close, both above and below the water. But every once in a while, we need to come in from the wild to clean and stock up. We did it more often last year, with a lot of friends coming on a weekly turn to meet us at a marina, and when we do this, I long for the day when we can get back out ‘there’.

We rented a car from Caroline’s Travel Store, a women who effortlessly switched between five languages to help her customers, and we headed inland to find the archaeological site at Knossos, the main tourist attraction in this part of Crete. We hit the road early to avoid reports of large bus groups, and to avoid the heat of the mid-day. At the entrance, we heeded more advice and hired a guide, and soon I was as much intrigued by the history as I was about this charming little old lady Eva. Knossos is the most well known of the Minoan settlements on Crete, a palace originally constructed in 2000 B.C. and then expanded in 1700 B.C. These dates alone caused me to pause and reflect. I’m 57 years old. The stones upon which I walked, and the remaining walls and courtyards that Eva lovingly interpreted for us, were older than 65 of my lifetimes! And, from all accounts, the Minoans were a peaceful society, where they carved out a life on Crete with a population back then greater than that currently on the island! Life seemed pretty primitive to me, dare I say primeval, just 100 years ago. There were no cell phones, no internet, no refrigeration. The light bulb had just been introduced, flights at Kitty Hawk had just been launched, and the Model T was early in it’s production run, with the horse and buggy still prominent. Yet, the Minoans, 3700 years ago, had found a way to develop and sustain a safe, economically viable society. Less than 100 years ago, we had had two world wars and came close to annihilating our entire species with mutually-assured nuclear destruction. Too often, we toss aside the knowledge and expertise of prior civilizations, despite the clear evidence of a highly advanced culture, able to survive socially and economically in the absence of all the comforts and conveniences we have available today.

In front of me were the remains of a four-story palace, and again, I was left bewildered. A single story building would seem like a challenge back then, in the absence of modern mechanization and hand tools. We need to re-evaluate our own self image as a superior society and dig for the lessons to be gleaned from these ancient yet advanced civilizations.

Bidding adieu to Eva, we went in search of the latest advances in wine making techniques on Crete. The island has an extremely tall mountain range that runs down the middle of the island, with fertile valleys throughout the northern interior. In recent times Crete has become well known for it’s respectable wines. Regrettably, Google maps has not kept up with the trend, and we took our rental car on a safari of sorts, with Google taking us off the main paved roads on a back wrenching pot-holed, stones-as-big-as-bowling-balls, ride over dirt roads. At one point, we had to abandon the car on the edge of a hillside vineyard and climb the rest of the goat path by foot, discovering a perfectly respectable road leading into the spacious winery parking lot! On our second stop, at Titakis winery, we were hosted by a cheerful young woman, Eleni, who had recently finished her wine studies in Athens and returned to her home in Crete to share enology responsibilities with the founder. The wine locker on Sea Rose hadn’t seen such a boost in inventory since our travels around the interior of France!

Our rental car wanderings took us to the nearby city of Heraklion, the nerve center of the island, and with a surprising number of flights landing and taking off despite the pandemic. We chose to duck the mid day heat by attending the archaeological museum with its many restored artifacts from Knossos. But I must confess, wearing a mask for extended periods, even inside buildings here, is a fatiguing, sweaty affair. I couldn’t wait to walk through the exit doors and into the heat but mask-free world. We had been told to not expect too much from this big city, and as we walked part of the waterfront, there was no mistaking this was a rough and ready town. The one notable piece of eye candy was the Venetian harbor. Along many of these northern cities, you will find a big modern harbor enclosing a small, shallow, often nearly round inner harbor, built by the Venetians. Often adorned with a tower or full-on castle at the entrance, their diminutive size and depth can make them unsuitable for most larger craft, giving one the advantage of appreciating their beautiful construction absent the super yachts and the associated over-commercialization. The Venetians also put their handicraft to work building showcases of long arched-roof stone boat houses, many of which still ringed the harbor, some converted for modern use, others left to age gracefully.

With our first impressions of Crete firming implanted in our memory, it was time for us to make our way west along the northern coast. From this mid-point, the next major harbor of Rythimno beckoned. Our craft – clean and bright and re-provisioned – was ready and willing to take her curious caretakers onward. Crete – that big, odd island at the bottom of Greece – was starting to unfold its treasures before our eyes, and we were eager to take it all in.