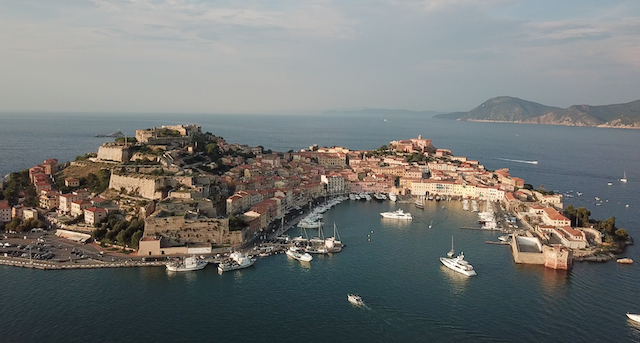 If you are sailing along the west coast of Italy, you’d be hard-pressed not to run into Elba. It sticks out like a big ink blob in this popular Tuscan region of Italy. Students of European history will ask ‘Hey, isn’t that where Napoleon was exiled?’ Indeed it is! But for a couple of non-history majors, all Karen and I were looking for was a rest stop on the great water super-highway to Cinque Terre.

Cinque Terre. If I had a dollar for every time someone had suggested to us – when they learned that we were going to sail around Italy – that we should visit Cinque Terre, I’d be a mighty rich man. But getting all the way north to Cinque Terre requires a bit of time and a comfortable weather window. Elba was the perfect halfway point from our start at the southern end of Corsica. With two 75 mile hops, separated by a little R&R at Elba, we’d be in the Five Lands in no time!

Yet, like so many other times this summer, the particular ports-of-call that guide books and online forums had played down turned out to be unexpectedly extraordinary. Dare I say, enchanting?!

We started with a pre-dawn departure from the little eastern Corsica hamlet of Pinarellu. I love these early morning exits. An awakening before the sun builds a giddy excitement for what colors the giant fireball of a sun will cast upon the new day. And skipping out this early makes you feel like a member of a special ops team under the cover of darkness.

But reality bites and burns. The passage to Elba was actually a long slog under power, complete with pesky diesel fumes and hot sun! We didn’t get to use our sails until the final few hours, where we heeled over steadily on a close reach, followed by headwinds coming off the land at the southern end of the island. Our destination was Marina di Campo, a crescent shaped harbor with good protection from the forecasted northerly winds, and enough civilization to merit a few grocery stores to help us re-provision. These harbors are a cruising sailor’s dream. Plenty of space for boats to anchor out and safely swing without risk of collision, a gentle sloping sandy beach at its circumference for an easy dinghy landing, and earthy aromas wafting down from the verdant foothills.

On our short list was dinner ashore, a simple gift to ourselves for sticking with the long day’s motor sail. This was a Sunday night, but Elba-goers didn’t seem to care. The streets were taken over by pedestrians, with the quintessential Italian scooter occasionally feathering its way through the crowds, driven as often by a dashing young Italian gent as it was by a svelte young debutante, stepping off her Vespa with the style and elegance of a lady of means dismounting her prized stallion, not a strand of hair nor swatch of fabric out of place.

Even with warm showers on board, we were no competition for the Italianesque Vespa crowd. Still, we enjoyed a refreshing stroll along the water’s edge after dinner, and I took in a countryside run the next morning, while trying to find the marathon legs I once had.

We had been expecting adverse weather to develop out of the north, and our choice of this southern coast of Elba took this forecast into account, but we were still surprised to find a long pronounced swell rolling into the harbor from the south, apparently from some far off weather system. With no wind to speak of, Sea Rose would gradually rotate through all the compass headings on anchor, and when she settled on a position exactly perpendicular to the arriving swells, she would roll violently from gunwale to gunwale, leaving you desperately seeking a hand hold; and, if there was still a spare hand, a pithy grab for glasses, plates, books and whatever else you were surrounded by in the cockpit. The first time it was funny, the second time not so much, and after that it was uncomfortable enough to make me want to pitch my breakfast over the rail. Despite being on boats throughout my life, motion sickness can descend on me without warning, and thankfully Karen agreed to a rapid departure from the harbor so that we could scope out a more protected spot from both wind and waves.

We found it just east at Cala del’ Innamorata, in the company of just a few other boats, all of us easily outnumbered by the number of fish swimming around as we dove overboard for an afternoon snorkel.

While we were spared the rolling swells, we still had to keep a watchful eye out for thunderstorms. On cue, the thunder and lightning arrived at dusk, and we got to enjoy a fireworks show of sorts as a substitute for after dinner dessert. The flashbacks came quickly of my childhood memories camping in the flatlands of Arizona, while lightning targeted the hills above us throughout the night. I can remember the balance of fear and fascination as the threat stayed safely off on the horizon. You can never completely let your guard down though when there’s lightning on the water.

The sun shown bright between the dispersing clouds the following morning, and we wasted no time to explore ashore. Innamorata, like so many sites in this living history book of the Mediterranean, held a legend within its shores. Loosely translated, Innamorata means ‘girl in love’, and the girl in this story was young Maria, betrothed to her man, Lorrenzo. As the legend goes, in 1534 Lorrenzo was kidnapped from this very shore and dragged onboard one of Barbarossa’s ships. Maria, in an attempt to save her future husband, entered the water and was swallowed by the sea, with just her shawl washing up on the beach.

In modern times, this coastline hosted a booming iron mining operation, the remnants of which can still be found on shore. We hiked along the shore path, as much to appreciate the history as well as the opportunity to gaze forth on beautiful Sea Rose waiting faithfully for us in the cove.

On the northern side of Elba is the main harbor of Portoferraio. This is ground zero for all island activities, including a non-stop stream of car ferries shuttling holiday makers from the Italian mainland just eight miles away. Like its southern port sister, Marina di Campo, Portoferraio is in the middle of a large crescent-shaped harbor, with options aplenty for anchoring cruisers. Dinner ashore was on the agenda again tonight, and while Karen showered up, I launched our drone to capture the fading light on the harbor and the fortification ashore.

With these tiny miracles of drone technology, once they are up in the sky, it’s easier to watch the camera view on the hand-held controller’s screen than to try to locate the drone up in the air. I use the camera view to guide it on its path and avoid close calls with boat masts, castle towers and the like. For this flight, I circled over the tightly packed city with a grand view of the ramparts on the hill top overlooking the city. Suddenly a message scrolled across the screen, ‘Aircraft Disconnected’ and the camera image froze. What? I had seen some birds flying over the city earlier and feared that they had attacked the drone, which some species are known to do, and it had fallen to the ground in a hundred pieces. I jumped into the dinghy and raced across the harbor, with my controller in hand, stopping at the first dock I could find. Still in bare feet, I took off at top speed, finding my sprinting muscles after all, and dodged people and vehicles as I criss-crossed the cobblestone streets looking for any sign of the drone. Realizing the immensity of the task, and the slim chance of finding any pieces of it, I reluctantly turned around and started back tracking to the dock. No sooner had I done that when I got a short message on the display that the drone had switched to ‘Return to Home’ mode. Cool, it was still alive! Except now I had to get back to the boat before it did! I sprinted back down the dock, threw myself into the dinghy and raced back out the harbor, dodging ferries and super-yachts, whose captains I’m sure had a few Italian swear words reserved for me.

In the middle of the harbor, I began to lose control of the dinghy. The darn thing would not steer straight. When I looked back at the outboard, I was shocked to find out it had risen off the transom and was getting ready to fall backwards into the water. Yikes! In my haste in leaving Sea Rose, I had not bothered to tighten the hold-down clamps! With the crisis averted, I sped up on a plane again, while reading a new message that the drone was now landing. I could see it high in the sky near the boat, slowly descending. With luck I might get there in time before it splashed down in the water and sank.

As luck would have it, the drone hovered just off the water, yet just out of my reach. With Karen’s help slowly motoring Sea Rose forward, I was able to scramble up on the bowsprit and reach out to grab the pesky creature. By this time the battery was dead and it finally let me wrestle it down to the deck. Phew, another crisis averted! Later, I found out I had a faulty cable on the controller. The drone had just been sitting there obediently waiting for its next command, until its software determined that it was time to return to home before the battery died. Thank you DJI for thinking through that scenario and saving my little tech wonder!

I have posted a video of the drone drama on our YouTube channel, titled ‘Spirited Sailing Around the Tuscan Island of Elba’. Check it out for bonus aerial video of me running through the streets on my drone chase! (‘The Drone Chase’, as Karen and I have begun calling it, begins around 7:35 in the video … it’s pretty funny, at least in hind-site!)

For more subdued entertainment, we toured the residence of Napoleon Bonaparte while he was exiled here 1814. It’s critical to put ‘exiled’ in quotes here as this was no prison cell or dark dungeon. His two story home overlooked a courtyard and garden, which in turn overlooked the glistening Mediterranean Sea. He was also allowed to keep several hundred of his men here for protection. The citizens of the town welcomed his arrival as he developed a proud following on this tiny island. Alas, he escaped just 9 months later and returned to Paris, restoring his emperor status, only to be defeated famously at Waterloo. His final exile was on the island of St Helena, far out in the Atlantic, where he died 6 years later.

We escaped Elba without fanfare for another full day of motoring north, this time to the town of Porto Venere and the Cinque Terre region beyond. On this long passage, we had plenty of time to reflect on our experience at Elba – an island full of scenic shorelines and surprising hide-aways. It was another delightful discovery outside the margins of prose in the cruising guides. Thank you Elba-men and Elba-women for the opportunity to enjoy your enchanting island paradise!