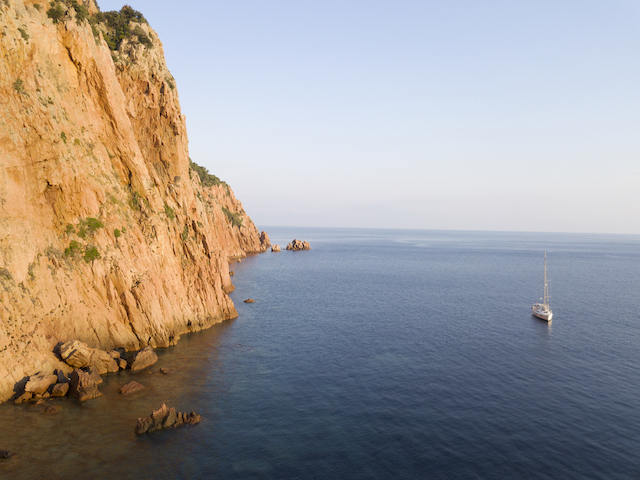 Emmy flew in to Toulon, a small port on the French Riviera between Marseille and Nice. Toulon is a common departure point for Corsica, since the coast of France east of Toulon turns a bit north, which only makes the Corsica crossing longer. We collected ourselves in one of the small offshore islands, Port-Cros, to spend our first night with Emmy onboard. The waters in Port-Cros are especially deep and thankfully the town provides moorings to avoid swinging on a long anchor line. The mooring field also helps to protect the Posidonia grasses from damage due to anchor use.

This particular mooring field in Port Cros must have been designed by an avid engineer, as the buoys were precisely positioned like intersections on a city’s rigid criss-cross street pattern, with the added excitement of being built back when the average boat length was much shorter than today. All of this, combined with shifting currents made for boats dancing on their moorings like a clumsy nervous teenager at his first high school dance abreast of his equally frightened partner!

While waiting for our evening departure window, we took a couple of hikes onshore to get a flavor of the local scene. The little harbor had a bit of a mountain hideaway feel to it with very few facilities onshore, and a gaggle of people that were pleased with the fact that they simply had arrived. It’s the kind of small harbor that you know when you come back in 20 years will be all developed and will have lost its small-time roots, including old wood fishing boats pulled up on the shore for repairs.

It was all fun, but I’ll be honest, it was also helped to calm nerves about our pending overnight passage. Karen and I had done these kinds of legs before, but in a new boat in new waters with new weather patterns, there was a much greater chance that events could turn on us. Some amount of fear is healthy and we took this in stride as the time approached 8pm, our targeted departure hour. Here’s a short video covering the eve of our departure and our overnight excursion.

We motored out of the Port Cros harbor and in less than 10 minutes were free of the island, pointing our bow nearly due East to Corsica and in a developing 15+ knot wind from the southwest, exactly what was predicted. We had already discussed starting off the leg with our big Code 0. This sail is our light wind weapon, propelling us along in conditions that might otherwise dictate the running of the engine. But given that it’s a large sail of extra light fabric, Code 0’s have a top end wind limit. Ours was 20 knots, preferably 15 knots. The temptation for a fast passage was too tempting and we sailed away at great speed.

I went down to get some sleep shortly after departure, leaving the boat in Karen and Emmy’s capable hands. I tucked myself cradle-style into the comfortable notch, brought about by our steady heel angle, between the side of the berth and the adjoining locker. If you have to sleep while underway, there’s not a better position to be in. Compared to our crossing to Mallorca –which involved consistent gravity-free launches off the berth as the boat pitched in large swells, or the return from Menorca that was a steady roll, once up on your left shoulder, then up on your right shoulder — this was making out to be a dream passage.

At 12:30 am, I came back on watch, with Emmy hanging in there for a few minutes to help with the watch transition. This was especially helpful, as the person going off watch just wants to find a flat berth somewhere, and the person coming on watch is groggy enough to not understand the nav briefing. Having Emmy there to remind me of recently spotted boat traffic as well as weather pattern observations, plus her assistance with sail trimming made the transition much easier.

I took over in a light 8 knot breeze, still out of the southwest. The remnants of a full moon helped visibility during the first half of my watch, but I was cast into complete darkness as we crossed through a three-sailboat flotilla. I monitored their position on radar, but unfortunately none of them had AIS on, which always surprises me as it is one of the cheapest safety instruments you can have onboard. Thankfully, the wind steadily built to 15 knots at the end of my watch at 4:30am, leaving the boat back in Karen’s hands as we skimmed through the water at a robust 8+ knots.

When I came back on watch at 7:30am, we were flush with sunshine and the island of Corsica in view. Strangely repetitious, I started with light winds and ended our passage in a building 15-20 knot breeze. Apparently, I was the wind whisperer on this voyage.

We did not have a lot of time to read about Corsica before our arrival, only enough time to pick Galeria as our destination. Most immediately striking was the dramatic mountain peaks just inland from the sea. The rugged sawtooth silhouette was tempting to explore, but will have to wait until another visit.

Despite the overnight sleep deprivation, we were all amped up to explore our new found island. After a couple locals politely asked us to pull up anchor and use a pair of bow and stern mooring buoys to protect the seafloor, we were off in our dinghy to explore. We knew there was going to be some impressive snorkeling in the Scandola Nature Reserve around the corner, and to warm up for the experience (and cool down from the heat!), we did some snorkeling on the rocky shore nearby Galeria. They do a good job of protecting the waters in this area from over use, and from boats anchoring and damaging the sea floor. The result was super clear water, and an enjoyable experience for all!

After a full night’s blissfully contiguous sleep, we got underway early to check out the Scandola Nature Reserve, just south from Galeria. Both the pilot book and the Navily app had plenty of glowing reviews of this protected stretch of the Corsica coastline, and our experience did not disappoint. How can you complain about a day when you go snorkeling a total of three times!

Immediately, we are entranced by a small cove, Base de Solana, with a hole in the cliff above us. We dropped the anchor and headed into the water for our first snorkel excursion.

Check out this YouTube video of our Scandola snorkeling adventures as well!

The beauty of a nature reserve like Scandola is unquestionable, but it comes with the restriction of no overnight anchoring. We pushed on south along the coast to find a suitable place to stop and reflect on all that we had experienced on this day. What we didn’t expect to find is more stunningly beautiful rugged coastline, the kind that leaves you breathless and without words to do it justice. We dropped anchor in a quiet cove named Anse San Pellegrino, around the corner from a prominent cape named Cap Rossu. Up to this point, the only San Pellegrino I was familiar with was the sparkling water variety you’re offered at finer restaurants. This was in a whole different league. Standing before us was a richly orange-hued cliff rising vertically out of the water to a height of 800 feet, topped with a Genoese tower. Our 44 feet of Sea Rose was dwarfed here by the hand of Mother Nature.

The few sailboats that were anchored when we arrived were quickly gone in the fading light of dusk, along with the steady progression of inflatable tour boats. Exploring in the dinghy before sunset, we found the reason for the attention. In the cliff edge were two substantial caves large enough to drive through with a small boat, one of which lead to an ultra secluded cove coveted by one lucky sailboat and a few healthy swimmers. We immediately put our plan of attack together:  get up early tomorrow and snorkel through the caves as the sunrise colored the rock but before the tour boats showed up!

And so it was, our sunrise snorkel of Cap Rossu – quiet, majestic, serene!

After the beauty of Scandola and Cap Rossu, it was time for us to make haste down to the bottom of Corsica and find a berth in Bonifacio, where Emmy would disembark. Bonifacio was high on my bucket list prior to arriving in the Med, as I had seen plenty of YouTube sailors chronicle what can only be described as a uniquely wind-carved harbor.  The pictures were hard to believe and seeing it in person was the only way to settle the mysteriousness of this southern outpost.

While Bonifacio is captivating from the sea, it really needs to be walked around to fully appreciate the old ramparts, the steep stairs, and the sweeping views of the super yachts tied up cheek-by-jowl, all of us there to check Bonifacio off the bucket list.

Thank you Emmy for joining us on this rugged, awe-inspiring leg of our summer sail. It would not have been nearly as much fun without you! We will leave you with a YouTube video of our Bonifacio adventures. Until next time!