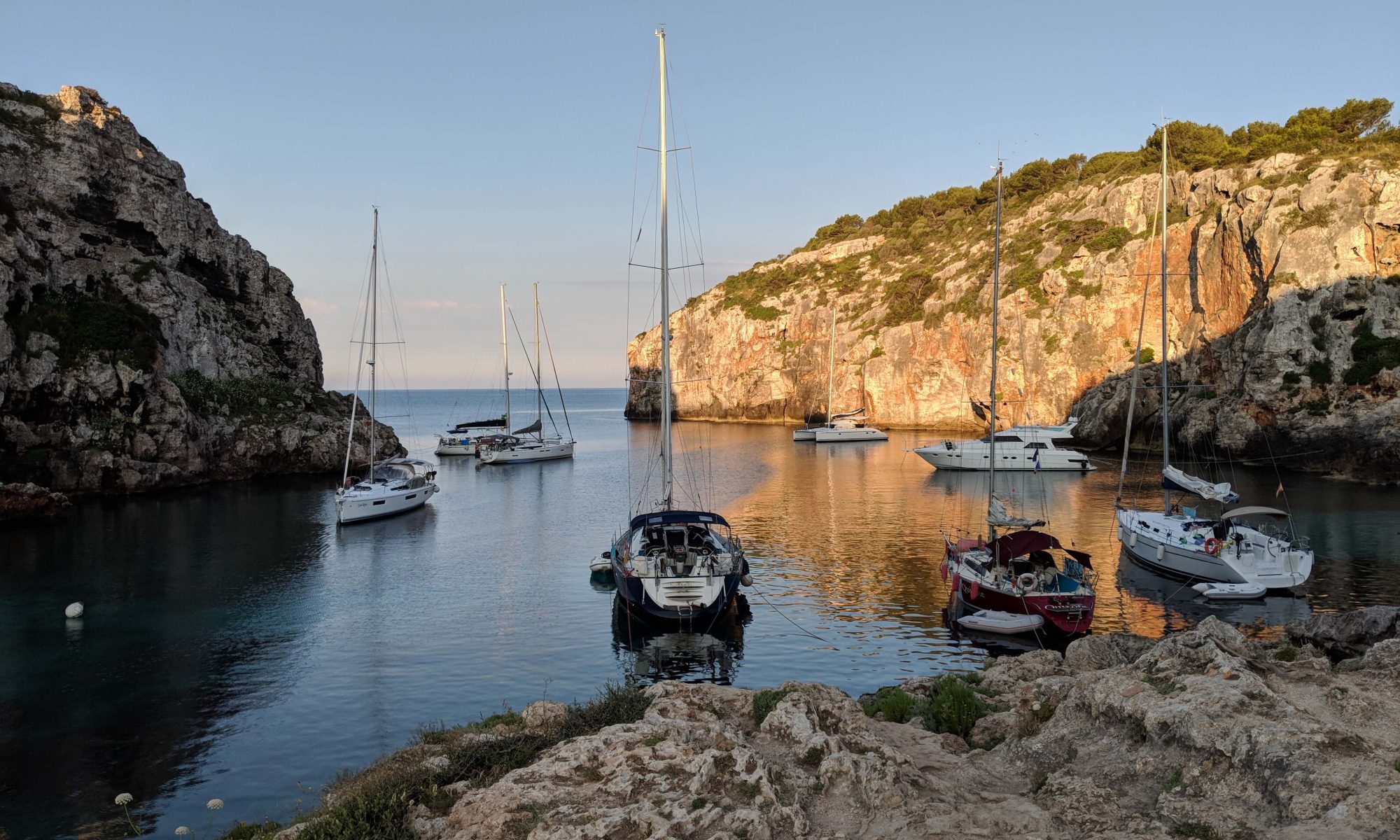 We are continuing our time in the Balearic Islands – the westernmost archipelago in the Mediterranean. At its closest point, this island group is 82 km (51 miles) from the southeast coast of Spain. After having spent three weeks in Mallorca – the largest island of the archipelago – we are eager to move along to Menorca, the second largest island and new waters to us! Menorca is the farthest of the Balearics from the mainland and it is rumored to be quieter than both Mallorca and Ibiza – an island we have not yet been able to visit that has a reputation of being a party spot!

Each time we had the space in our schedule to try to visit Menorca, there were high north winds coming out of the Golf of Lyon in France and this meant navigating and being on anchor around the island of Menorca would be very comfortable if not dangerous. We were thoroughly enjoying Mallorca so we were far from suffering; still we were none-the-less excited once we had a clear weather window to see this island.

We left from Puerto Christo on the southeast coast of Mallorca and headed northeast for the 41 nm crossing. Our destination was Cala Covas in the center of the southern coast. We enjoyed a nice sail for most of the day; the journey took us about 7 hours.

There are many wonderful coves on the south shore, but we knew we had just less than a week on the island so we had to narrow our choices!

Cala Covas – What an amazing first cove to introduce us to the beauty of Menorca! From the pilot book, we knew this spot was popular and that we would probably have to use either two anchors or an anchor and a line to shore so that we didn’t swing too wide. This is the way a lot of boats can be accommodated in a small space. If you put out both a bow and a stern line, you will only move a little back and forth with the wind, waves and currents. This is as opposed to possibly swinging in a 360-degree circle around a single anchor as conditions change. A lot of the coves in popular anchorages have iron posts or rings affixed into the rock faces around the cove so boaters can use these to safely secure themselves from swinging too broadly. When we arrived in Cala Covas, we couldn’t see any obvious way to tie to shore so we opted to put out a bow and stern anchor on the side of the anchorage.

There is evidence that human occupation of the Balearic Islands dates back to 4000 BC. Much of this evidence was found in the many caves that exist throughout the islands and the caves around Cala Covas are the best-preserved complex of prehistoric caves built and extended by the inhabitants of long ago. Many of the island’s ancient dwelling and burial places have been bared off to preserve the integrity of their ancient state.

One popular destination that we took a drive-by of is Cala en Porter where local entrepreneurs have converted a cave complex into a discotheque – really! Check it out:

Here are a couple other photos of the beautiful southern coast of Menorca.

Mao (Mahon in Spanish) is the current capital of Menorca and is located inside the long, natural harbor by the same name on the eastern side of the island. (Take a look at the map from earlier in the blog post to understand the size of this harbor) Traversing this 3-plus mile long harbor will allow the visitor to see the multiple fortifications built to defend the town and its people.

We anchored in peaceful Cala Taulera which is really more of a bay behind an island located along the long Mao Harbor. We enjoyed paddle-boarding around the anchorage and this gave us the opportunity to meet two other Americans – Barb and Vince from the boat, “Horizon”. They were a wealth of knowledge and we loved hearing their years of stories over a shared bottle (or two??!) of wine. The common-denominator of being American and cruising in foreign waters was more than enough to build upon and this allowed us to have an enjoyable evening in the company of new friends.

Here are some shots of the anchorage and our walk around the nearby ‘La Mola Fortress’.

As we prepared to leave this location, we discovered that our drinks and food were not being kept cool enough despite continued adjustments to make our fridge cooler. Suddenly, I realized to my shock and horror that the freezer NEEDED TO BE DEFROSTED!! Yikes – what we take for granted with life’s modern conveniences. Many boat refrigerators require periodic defrosting … alas, I had simply forgotten this fact. This gave us the excuse to test our deep freezer that we had yet to try out! I turned that additional device on, waited a half hour then transferred all of our luke warm stuff from the fridge over to this newly cold unit and was delighted with the performance. Once the defrosting was complete and the fridge was again becoming cold, I decided to see how the new unit was in really freezing things. It was crazy hot outside so I wasn’t expecting greatness. However, just an hour later I had tiny ice cubes … ICE ON A HOT BOAT. There really isn’t anything quite as pleasurable – honestly!

With our food safely chilled, we moved further north around the east end of the island and anchored off of Isla d’En Colom. It is amazing how different the geography is on this northeast section. The land is quite flat, as you can see from the photos.

We enjoyed this anchorage because it was surrounded by a bunch of small islands and shallow areas which meant the water was very calm and we could go for a nice, long paddle-board excursion. There were a ton of boats anchored here when we arrived around 4 pm but slowly throughout the afternoon and early evening, boat after boat took their leave. By nightfall, we were only one of four remaining boats for the duration of the night. It is quite typical of popular anchorages that ‘day-trippers’ (boats that come to enjoy a spot for just the daytime hours) will swarm to spots by 10 or 11 am and they will be gone by early evening. If you can tolerate crowds in the afternoons you can often have a wonderful place almost to yourself as the sun dips and prepares for another day.

Our final anchorage on Menorca was in Arenal D’en Castell – a well protected harbor that was a haven for tourist resorts! Still, the snorkeling and paddle-boarding were terrific here.

We rented a car for our final full day on Menorca so we could see and appreciate a greater portion of the island. During this exploration, we visited a series of necropolis caves (ancient burial sites) near Cala Morell and this is one of the few prehistoric sites accessible to the visiting public. Can you imagine being special enough to be buried in a cave like this some 1500 BC?

We drove all over the island – we visited the old capital, ‘Cuitadella’, on the west coast and we drove to the very rugged north coast to see the Punti Nati light house.

This area was like a barren moon-scape! All across the land there were 4-foot high stone walls crisscrossing every which way. We learned these were very old livestock grazing plots. The weather in this area can get so severe that they create heavily fortified protection structures for the livestock. This is one of them:

We also visited the highest point on the island – Monte Torro – where there is a convent that is occupied by the nuns of the Franciscan order! The view from here was tremendous. Despite being in the center of the island, we could see the coastline in several directions.

The next day, we were heading out early for the 115 mile crossing to the southeast coast of Spain. It was our plan to again leave very early in the morning (3 am) so we could arrive at our destination in daylight. The winds were light so we had to motor most of the morning. We kept thinking, “it must be almost July” since it was crazy hot! The heat exhausted both of us — each time we got off watch, we would go below deck to try to rest and cool off. Like the previous crossing between Spain and the Balearic Islands, we were again visited by a pod of dolphins. Here’s the video I shared last week on the highlights of their time playing on our bow, in case you missed it.

By 8 pm we were securely tied up to a mooring ball off the town of Tossa de Mar along the coast of Spain.

Tune in next time to hear about our explorations of Spain’s Costa Brava region and the French coast as well. Thanks for reading!

5 Replies to “Sea Rose Visits The Island of Menorca! Ep. 99”