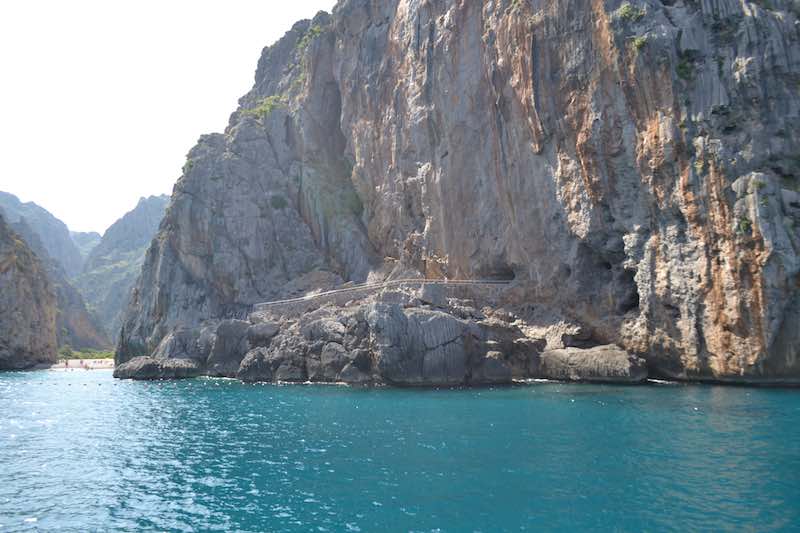 At 3 am on the final day of May, we set off from the Marina in Puerto de Blanes on the Spanish coast (north east of Barcelona by about 70 kilometers – yes, we have fully converted to metric!). Today would be the first ‘crossing’ in our new boat … the shake-down cruise continues. Our destination is the harbor of Soller on the north coast of Mallorca, the largest of the Spanish Islas Baleares (Balearic Islands) in the western Mediterranean. The total distance we need to cover is 115 nautical miles (nm).  I think we were both fighting back some nerves as we pulled out of the harbor in the moonlit early morning hours. As is becoming our modus operandi, I was at the helm to pull us away from the dock and all went well since we had very little wind and absolutely no other boat traffic. Though I’ve had some close-quarters practice while we were berthed in Canet, France, I am still quite jittery as I attempt maneuvers at the dock since Tom handled nearly all of those tasks on Thalia, our previous boat.

We knew there was the likelihood of fish traps that could get snagged by our prop as we motored off shore so we both kept a watch until we got into water over 50 meters deep, which only took about 10 minutes of motoring!  We then began our watch schedule beginning with our morning person (Tom, of course) taking first watch. I snuggled back into bed and tried to get some sleep. The seas were quite choppy so a deep sleep was out of the question as the bow would frequently crash into an oncoming wave and make my body momentarily weightless in our forward berth. Our bed happens to be the worst place to sleep in these conditions and I could certainly move into one of our other sleeping quarters but I thought the seas would calm down! Three hours later, Tom would experience the same weightlessness! Oh well – life at sea.

Midway through our crossing, we had a wonderful surprise – a pod of dolphins dashing toward our bow to play in our wake! This is one of the very most special times on a boat – you can literally observe the happiness of the dolphins as they jump, flip and play around your moving home. Watch this video which is a compilation of the time they spent with us.

We picked the early morning departure time so that we could arrive at our destination during daylight hours. We are minimizing our risks and neither of us love to enter an unfamiliar harbor under the cover of darkness – especially when we would not have the helpful moon to light our way until well after midnight.  Because of this desire to arrive before sunset, we had a minimum speed we needed to maintain and, unfortunately, we had very little wind for most of the crossing. We enjoyed a couple hours under sail power but we would have liked more! As part of our new-boat obligations, we needed to break in the engine by running it pretty hard for the first 50 engine hours – which we were less than half way through. While this made the crossing pass relatively quickly, it made us both a little anxious; it is never relaxing to hear your engine operating at high RPMs and much less so when continuing for extended periods of time. Still, we want our girl to last a long time so we are going to take good care of her and this is supposed to aid with engine longevity!

As the day wore on, a cloud bank appeared to be building in front of us but since it was quite hazy, it wasn’t well defined. We would learn that this was really a silhouette of the island with a small cloud covering on its high peaks. As the truth came into focus, we saw the huge Mallorcan mountain range reaching into the heavens! The peaks around Soller are some of the highest on the island, reaching 1145 meters just a couple miles inland and this is what we were seeing materialize out of the haze of the afternoon – not a cloud bank! Now we really couldn’t wait to explore these islands.

All in all, we would spend three-and-a-half weeks in Mallorca and almost a week in Menorca, one of the other main islands in the Balearics. We had two different sets of guests on board in Mallorca and, since we wanted everyone to see as much of the island as possible, we navigated most of the way around it … a couple times! Instead of covering our time on Mallorca chronologically, we’re going to cover it by area on the island – I think this will make it easier from a readership perspective to get to know the island!

(include a map of the Balaerics, Mallorca broken down into how our posts will be organized … and any other map?)

In this post, I will focus on the north coast. The next blog post will cover the southeast coast, Cabrera – the island off the southern tip – and the city of Palma, the island’s capital. Finally, we’ll do one post on the island of Menorca to round out our time in Islas Baleares.

The entrance to the Soller harbor is graced by two light houses and very dramatic cliffs and caves. The harbor is almost perfectly round and it has a great vibe! Upon arriving after a long day’s passage, we were nicely settled on our anchor by 6 pm – time to enjoy some champagne to celebrate our first successful open-water passage on Sea Rose! Soller is, quite interestingly, made up of two distinct town centers – the Port of Soller and the darling Town of Soller that is several miles inland to protect the population from long ago pirate activity – imagine that! It turns out to be quite common throughout the Mediterranean for coastal communities to move their towns into the inland hills and valleys.

And here are some photos of the inland town of Soller …

We spent several nights in Soller, not only because it is a terrific little town but also because it is where we began our explorations of the island with both of our sons on board and, a week-and-a-half later, our good friends Steve and Patty. Each time, we rented a car and drove over to the very busy airport outside of Palma to pick up our guests. This also gave us the perfect excuse to shop in the huge stores around Palma so we could provision easily and also to get additional things we needed to make life on-board easier and more comfortable.

The north coast of Mallorca is very rugged with tall cliffs that often are vertical for hundreds of feet above and quite a distance below water as well. There are dramatic rock structures that surround natural coves which can be used for overnight anchoring if the weather is calm. The north coast is known for offering few protections if the weather turns. However, other than one “energetic” sail around Cabo de Formentor in the northeast, we enjoyed stable weather and explored as we wished. We typically stopped at one spot for lunch then moved on to where we would spend the night. There simply was so much beauty to be seen that we felt continually pulled toward the next exciting spot!

Cala de la Calobra and the ‘Torrente de Pareis’, the carved river valley that created this cove and the beautiful canyon walls inland as well. Truly stunning. There is a passageway through the cliff walls that allow you to walk from one cove to the other. We got some great photos of our boat looking out of the ‘windows’ in these passageways. This place was so amazing that we went there ourselves, then we took our sons there, then we also took Steve & Patty there. Some things should not be missed and this was one such place!

Cala Castell – The drone shots of this cala (cove in Spanish) say it all! Check it out.

Isn’t that a crazy slab of rock? It slants at a consistent angle to the water from a very high height and the rock is rough like maybe it was a volcanic flow that has deteriorated over time. As with many calas on the north shore, this one has no commercial development, just lots of goats and swimmers that hike over for the day.

Cala Val de Boca – This cove is incredibly barren but beautiful in that stark simplicity! Each night we anchored here, we heard goats bleating from the surrounding steeply pitched mountainsides. Though boats would enter the cala and loop around to check out the sights, no one ended up spending the night with us which made the evenings on the hook very special. The sky was pitch black, making you feel you could reach and grab a star of your choice. The sunrises were interesting. Since we were in a cove with very high sides, we could only see evidence that the sun had, in fact, risen even though our immediate surroundings were still somewhat gray. Steve took some great early-morning shots … hope you enjoy them and the other pictures of Cala Val de Boca!

Here are a couple other special shots from the north coast of Mallorca … enjoy!

Stay tuned until next time to learn all about the amazing southeast coast of Mallorca!

4 Replies to “The Explorations Begin – Mallorca, A Jewel of the Balearics, Ep. 97”