For my Civics class, I have recently completed a survey of 16 friends/relatives and their volunteer hours over the recent past. So that I could easily represent this data, I asked that the hours be submitted into one or more of these 6 categories: School, church, hospital, community, coaching, and other. To those of you that I e-mailed in September, thanks for participating. Sorry I could not update this sooner- I have been very busy. As I read the e-mailed responses, I converted all of the data into percentages, forgetting that I had no easy way to represent this in a graph. I then assumed that the average hours spent volunteering in the recent past would be 100 hours of volunteer work. So I converted all of the percentages back into hours. These are the results in a bar graph: 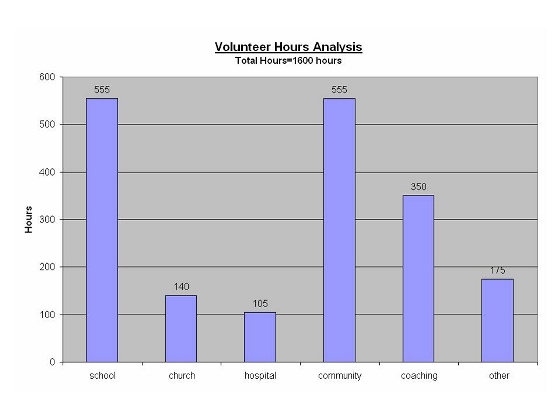 (A fictional story by Zachary. The assignment was to write a story about an animal that helped a man.)

Janyang swept across the plains of North America, the foothills of the Rockies on his left, and the endless plains stretching far to his right, stretching out of sight. With his spear pointed forward, he slowed when he heard a herd of pigs approaching. The herd turned away when they saw him, but one of the curious younger ones continued on, and brushed against Janyang’s legs, before trotting back toward it’s herd. However, the young rogue had human scent on him now, and when he came to the other pigs, they snarled and kicked him away. Janyang had crept along behind the rogue, and now he intervened, protecting the poor little pig with his spear. The other pigs paused, and, after a moment’s hesitation, trotted away. As it was getting near dinner, he decided not to give chase, and turned toward the hills. He walked in that direction for a while, his tribe’s camp being under and around a rocky outcropping. Lost in thought about the strange pig’s behavior, he did not hear the threatening rattle of the coiled rattlesnake lying on the ground. He was only aware of it’s presence when it had jumped and was rearing up at him. He stopped and stared, terrified, at the snake about to bite him. He knew it was already over. He shouted, but to no avail. It was now a foot from his bare leg, when suddenly it had fallen to the ground, and was writhing in agony. Janyang looked and saw that the rogue pig had bitten it and killed it without fear. Janyang realized that it had a resistance to snake venom. From then on, Janyang and Mathnea (which means ‘deserter’) would always be together, Mathmea protecting Janyang while Janyang hunted and fed him. It was an advantageous relationship for both of them.

(A poem by our youngest)
I lost a wallet blue and sleek
Dreaded I lost it for a week.
I found it in my pants in my shorts pile
Luckily it’s not down the Nile! 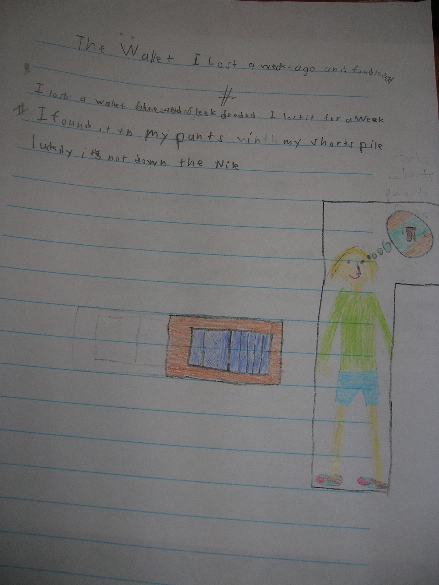 By the youngest member of the Thalia Crew!

There are lots of differences between living in a house and living on a boat. A boat is always moving because of the wind, water currents and ocean swells. All of the rooms in a boat are smaller. In fact, my room, my bathroom and by brother’s room would fit three times in my bedroom at home. Another big difference is how we get electricity. We buy it at home and we generate it on our boat by running our engine. The last big difference is water. We carry it with us all the time in four tanks. We have to be very careful about not to use too much. My favorite difference is that we can travel in our home.

A day on the boat is much different than a day at a normal house. Starting at the beginning of the day, you wake up in a small bed with a shelf around you and a clothes hammock right above your bed. You get up and get dressed in the small floor space available to you. Then you come out to have breakfast, and find your Dad working on the computer and your Mom still in bed. You beg Dad to make breakfast and he shuts down to make warm cereal, on a good day. And on a bad day, he’d tell you to get some cold cereal, like Cheerios. When Mom and my sibling get up and have some cereal, we leave port or anchor, at an average time of about 10am. Then we set off, sailing usually at about 5 knots for 20-25 miles. During the day, I usually read, write, do school work, or just look at the surrounding landscape. For lunch I might have crackers and peanut butter and/or hot pepper jelly, hummus or a sandwich, depending on what is available. Around mid-afternoon we usually arrive at our destination. It takes a good hour to settle down, at which point we usually, depending on what time it is and where we are, kayak around the area, have dinner and then “veg” out, take a walk ashore, or if it is really late, go to sleep. And that is the end of an average day on the boat!